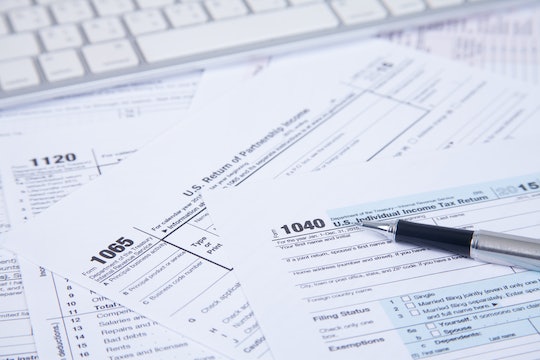 If you've ever split up from the other parent of your child, then you know how tricky, heartbreaking, and sometimes infuriating it can be. Trying to settle all the little tiny details of separation can be excruciatingly tedious, like filing taxes separately. How do you decide who gets to claim dependents? What happens when both parents claim a kid on 2019 taxes? If you're finding yourself in this unfortunate predicament, you might be worried about possible audits or issues with your return. Who has the right to claim a dependent?

Family law attorney Randall M. Kessler tells Romper that when it comes to both parents filing taxes and claiming their child on their tax form, "the laws differ in different states," so you really have to look up and figure out what your laws are in your state. When it comes to deciding which parent has the right to claim the child, Kessler says, "in some states, the person who has 50.1 percent custody or more gets to claim them, unless the parties agree otherwise. Yet in some states, the court can decide who gets to claim them."

According to Washington, D.C. attorney Thomas Simeone, "Legally, only one spouse can claim a child on their tax return." He tells Romper, "Of course, the one who is not legally permitted can do so accidentally or intentionally, but doing so opens them up to liability for taxes, penalties, and interest, as well as repercussions with the family law court for violating any order that may be in place." So, if your ex claimed your child on their taxes and it violates any previous court agreement, they could be in big trouble.

In fact, Simeone explains that "there are two potential repercussions from claiming a child on your taxes when you are not legally able to do so. First, the IRS and state tax authorities may penalize you by collecting the tax you should have paid, as well as penalties and interest. Moreover, if they find that the claiming of the child was intentional, a parent may have committed tax fraud, which can be a criminal offense. Second, if the other parent’s right to claim the child is in a court order – which is very common; either in a judge’s ruling or by the parties’ agreement being incorporated into an order – then claiming a child is a violation of the order."

If your ex has claimed your child without being allowed to do so, they can be penalized by the family law judge and could be required to pay you more money, have their visitation or custody revised, and even have their child support modified. Kessler takes it a step further and says that if the order was violated, the court could "hold the party in contempt and even incarcerate them." Plain and simple, messing around on your taxes is no joke.

So if you know that your ex has wrongfully claimed your child on their tax return, Simeone suggests that you "immediately notify the family law court to have the other parent file an amended return. This will avoid the IRS noticing that the child is being claimed by both parents and then auditing both parents’ returns." When it comes down to it, the IRS is most likely to award the parent with the most custodial time with the child. Do yourself a favor and make sure you file your taxes by the book.