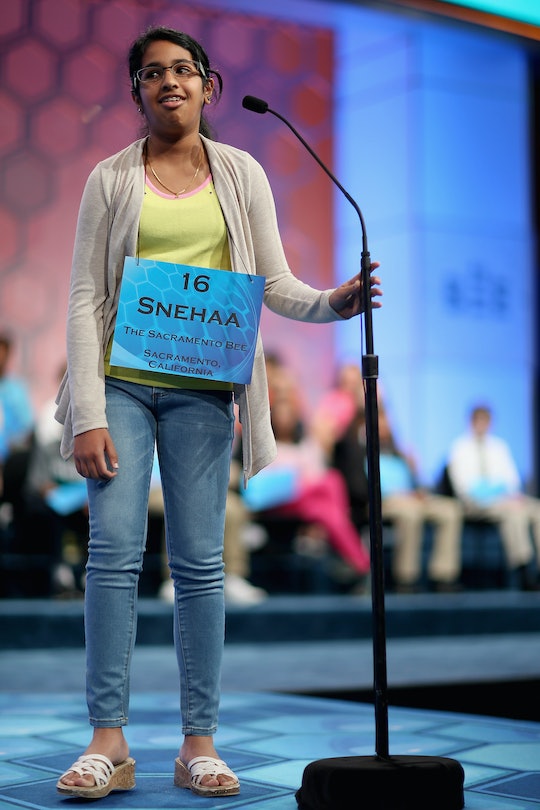 What Is Algonquian? The Language Made An Appearance At The Scripps Spelling Bee

The ten finalists at the 89th Scripps National Spelling Bee confronted some pretty formidable words during the nationally televised event Thursday night. Aplustre? Check. It's from Greek. And there were words like kakiemon and Wehrmacht, which have Japanese and German origins, respectively. They're doozies, but most people heard of the languages they come from. And then Snehaa Ganesh Kumar began the round by nailing "nasaump," which comes from a language called Algonquian. But what is Algonquian?

Because we're talking about this in relation to a spelling bee, it's appropriate to peruse Merrian-Webster first. The online dictionary defines Algonquian as both "an American Indian people of the Ottawa River valley" and "the dialect of Ojibwa spoken by these people." Geesh. It's not just the words that are obscure.

Over and over throughout the event, held at the National Harbor in Maryland, the spellers, mostly in middle school, are asking a questions about their words, one over and over: "Can I have the language of origin?”

More Importantly, it's a North American Indian language family. (Nasaump means kernels of hulled corn, FYI.) At one time, the family's member languages were spoken in parts of the United States, in addition to Canada, including "New England, the Atlantic coastal region southward to North Carolina, and the Great Lakes region and surrounding areas westward to the Rocky Mountains," according to Encyclopædia Britannica. Languages in the family include Cree, Ojibwa, Blackfoot, Cheyenne, Mi’kmaq (Micmac), Arapaho, and Fox-Sauk-Kickapoo. Maybe spelling bee words for next year?

According to a FiveThirtyEight roundup of words used in bees over the decades, Bee words frequently originate from Latin, Middle English, French, Greek, Italian and German, as Hawaiian, Yiddish, and Sanskrit, among many others. And to think I once lost a grade school spelling bee by misspelling "orchestra." These kids are amazing.