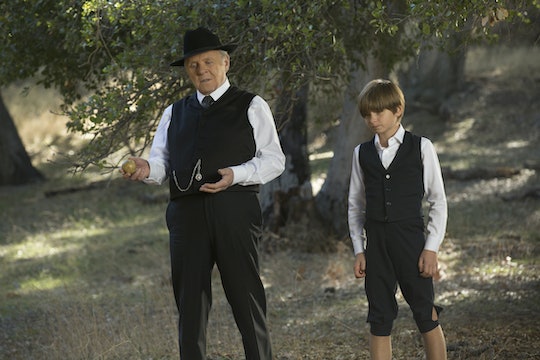 What Is Arnold Up To On 'Westworld'? The Probable Villain Seems To Be At Large

Westworld has a large ensemble cast, with many major characters who have interesting, well-drawn backstories. Yet somehow, the most intriguing character is the only one we've yet to see in the flesh – Arnold, Ford's former partner and the co-founder of the theme park. Arnold seems to have been set up as the series' villain, though he allegedly died over three decades prior to the events we're seeing on the show. But as "The Adversary" reveals, Arnold appears to still be at large, leaving us with one major question: What is Arnold up to on Westworld?

Elsie, in the aftermath of her near-attack by the rogue Woodcutter host on "The Stray," dedicated herself to figuring out what caused the robot to go off-command. On Episode 6, she found her answer, after tracking the signal from the satellite in the Woodcutter's arm back to a creepy abandoned theater in Sector 3 of the park.

Apparently, multiple people – including Theresa and Arnold – had been tampering with the older, satellite-capable hosts still remaining in the park. According to Elsie, they were using the bicameral system we'd already heard about – Arnold's initial attempt at creating consciousness for the hosts, in which the creators were able to speak to the hosts in their minds, as if they were the hosts' own thoughts. Theresa, in particular, had supposedly had a hand in reprogramming the Woodcutter in order to have him relay some unknown data.

The fact that both Theresa and Arnold had coded from the same place seemed to suggest that the two might be working together. But to what end? Ford's scenes on tonight's episode shed more light on what Arnold's larger game plan might be.

Bernard, while working with Elsie to figure out where the signal to the Woodcutter had originated from, managed to track down a few unmonitored hosts in the park. As Ford explained when Bernard stumbled onto the sequestered house full of strangely British-accented robots, the unmonitored hosts were replicas of his own family – a gift from Arnold to Ford, from back when the two were on better terms with one another. Bernard was unnerved by the fact that there were unmonitored secret robots in the park, but that wasn't even remotely the most troubling part.

In the closing moments of the episode, Ford sought out his younger robot self, intending to play catch with the boy and his robot-dog, Jacque. What he found was the dog dead and the child host lying about the circumstances. Back in the lab, he uncovered the truth – that Arnold had been communicating with young robot-Robert and had convinced him to put the dog "out of its misery" by killing it. "Arnold's" reasoning? That the dog was a killer, but couldn't help it because he was built that way. Poor robot pup.

This incident with the child robot and his dog seemed clearly indicative of Arnold's grander scheme – to destroy the park he'd helped to create. This ties in perfectly with what was revealed in last week's "Contrapasso," during Ford's conversations with Dolores and with the Man in Black. Dolores kept hidden from Ford the fact that she'd been communicating with Arnold when Ford quizzed her on Arnold previously trying to use her to help him destroy the park, mentioning to an unseen person that "he [Ford] doesn't know" after her creator left the room. The Man in Black, too, mentioned Arnold, reminding Ford of the time, thirty years earlier, when Arnold had attempted to destroy Westworld – and had destroyed himself in the process.

If Arnold's ultimate goal is to destroy Westworld, as it appears to be, he seems set on using his own creations to do it. So far, we've seen him recruit Dolores and Robert's young host to his cause – but he's unlikely to stop with them. The million-dollar question, now, then – why is Arnold so set on the destruction of the thing he worked for so long to create? That's a query that, hopefully, we'll see answered by the end of Season 1.