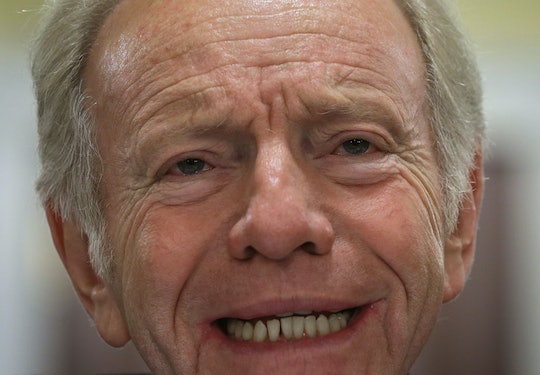 Last week, President Donald Trump dramatically fired FBI Director James Comey, allegedly because of Comey's ongoing investigation into ties between Trump and Trump associates and the Russian government. Now, politicians on both sides of the aisle are desperate for a drama-free replacement process. And although nothing is official yet, Trump indicated Thursday that he has chosen a new nominee in former senator and onetime vice presidential nominee Joe Lieberman. He's a frustrating choice for lawmakers who believe the FBI director should be as apolitical as possible. Which is why a full rundown of Joe Lieberman's political background is sure to play a prominent role in Lieberman's potential confirmation hearing before the Senate.

Trump told reporters that he is "very close," to selecting a new director to appoint during a meeting with Colombian President Juan Manuel Santos, according to CNN. He reportedly replied with a "yes" when asked whether Lieberman was the frontrunner.

In some ways, Lieberman's resume outs him at the antithesis of the type of person whom many in government have said they would like to see fill Comey's role — both for what's on it and what's not. That's because, in addition to having a long history of holding elected office, the 75-year-old has never worked as a law enforcement agent or as a federal prosecutor.

He certainly doesn't fit the profile that Republican Senate Majority Leader Mitch McConnell, a noted Trump defender, has in mind. In an interview with Bloomberg News Tuesday, McConnell described his ideal candidate:

Historically it’s been a solid law enforcement professional without a background in elective office. That's the kind of person who ought to be in the job and I think it would also make an important statement about the president himself.

That's certainly not Lieberman. Far from never having held elected office, he was first elected to the Connecticut State Senate in 1970, and he became its majority leader five years later. He completed a five-year stint as the state's attorney general in 1988 before being elected to the United States Senate in 1989. He served in that capacity until 2013, but not before serving as Al Gore's running mate in the 2000 presidential election and launching his own bid for the White House ahead of the 2004 race.

Perhaps, in another world, the fact that Lieberman did all this as a Democrat-turned-Independent (he even served as the chairman of the Democratic Leadership Council between 1995 and 2001) would at least indicate that Trump was planning on extending an olive branch to the opposing party. But Lieberman has a long history of incurring the ire of Democrats, such as when he encouraged Democratic senators to oppose former President Barack Obama's nuclear deal with Iran in 2015. He also stymied Democrats' attempt to expand Medicare to people aged 55 in 2009, which infuriated his colleagues. And even before all that, the then-senator endorsed John McCain over Obama ahead of the 2008 presidential election.

On the flip side, he's shown support for Trump's wildly controversial education secretary pick, Betsy DeVos. And, of yeah — he currently works for a law firm that has long represented Trump himself.

For now, Democratic lawmakers are both infuriated with Lieberman for his past actions as a politician and concerned about his lack of experience in rejecting him for the job. If Trump does opt to nominate him, a vote in the Republican-majority Senate will decide his fate.