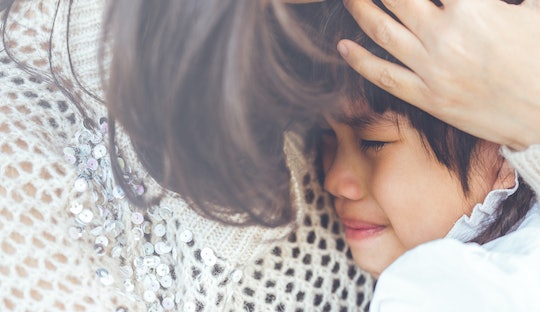 Everything You Need To Know About PANDAS

One week you're walking through the park with your child, picking dandelions, and playing in the sandbox, and the next week, after a few days of strep throat, your child is suddenly agitated at the park. They won't touch anything, they're moody, they're fussy — you figure they're still getting over strep until someone mentions it could be PANDAS. But what is PANDAS? How have you never heard of this?

More Like This
9 Signs Your Child Is Overheated
What Parents Should Know About The New CDC Mask Guidelines
The Best Splash Pads For This Summer
18 Best Sand Toys In 2021 For Babies, Toddlers, & Kids

According to the National Institutes of Mental Health (NIMH), PANDAS is the abbreviated name for Pediatric Autoimmune Neuropsychiatric Disorders Associated with Streptococcal Infections. It is suggested that it is a neurological condition secondary to a strep infection, like strep throat, impetigo, or scarlet fever. According to the PANDAS Physicians Network (PPN), it's a disease that affects the blood-brain barrier and causes a massive shift in behavior almost overnight. Some of the symptoms could be tics, obsessive-compulsive behaviors, or huge mood swings. The NIMH noted that the bacterial infections trigger an immune response, which creates antibodies. Some of these are "cross-reactive 'anti-brain' antibodies that target the brain, causing obsessive-compulsive disorder (OCD), tics, and the other neuropsychiatric symptoms of PANDAS," according to the NIMH.

First identified by the NIMH in 1998, PANDAS continues to be a source of frustration for the medical community, despite twenty years of data and pathologies, due to the rarity of the disease, combined with sometimes being over-diagnosed by pediatricians, according to the Tremor and Other Hyperkinetic Movements journal.

Dr. Saul Hymes, MD, an infectious disease specialist and pediatrician at Stony Brook Hospital in New York, for one, is skeptical. He tells Romper that he thinks that PANDAS is over-diagnosed, "especially as there aren't clear diagnostic criteria and the American Academy of Pediatrics doesn't recognize it."

"Children with OCD or tic disorders worsen when ill with anything," Hymes explains. He agrees that it should be better studied, but he also worries that with the current problems with antibiotic resistance, the over-diagnosis of PANDAS and subsequent usage of amoxicillin in its treatment for neuropsychiatric issues, "isn't OK."

Dr. Clay Jones, MD from Boston, thinks that there is at least some plausibility of the diagnosis, given other strep-related conditions. He tells Romper that he worries that parents are seeking confirmation with a self-diagnosis and that pediatricians are giving just that. He also worries that the expensive, risky procedure that is suggested for the treatment of PANDAS, Intravenous Immunoglobulin Therapy (IVIg), is not going to give the miraculous reversals that they suggest are possible.

The reversals he's referring to are the ones lauded by Dr. Susan Swedo, the leading PANDAS research physician. She claimed that IVIg can be used to treat PANDAS in the same way she prescribed it to treat traditionally diagnosed OCD, beginning with a small study of thirty children in 1999, according to PANDAS network. The PANDAS network noted that a study between the NIMH and Yale in the use of IVIg in PANDAS cases shows preliminary results as positive, but not conclusive.

So what is IVIg, exactly? The Journal of Translational Immunology defined it as "a blood product prepared from the serum of between 1000 and 15000 donors per batch." The article noted that it is the preferred treatment for patients with antibody deficiencies and it is administered to the patient intravenously. The above information from PANDAS network suggested that most patients won't require frequent infusions, and it is a four to six hour intravenous drip administered by the patient's doctor at a medical facility.

So how does PANDAS happen? According to the Tremor Journal, a child develops a type of Group A streptococci (GAS), like strep throat. These bacteria mimic other cells in the body, so it takes a while for the body to recognize them as a foreign invader, according to Todar's online bacteriology textbook. Finally, the body's immune system reacts, creating antibodies to fight the infection. Some of those antibodies are "cross-reactive," meaning the strep was so good at mimicking the body's natural cells that the antibodies cannot distinguish between friend and foe, noted the NIMH, and they attack healthy brain tissue, according to the The Agalliu Laboratory at Columbia University.

The PPN suggested that when the brain tissue is attacked, the child's behavior is altered — these are the "neuropsychiatric" symptoms associated with PANDAS. These symptoms come on rapidly, according to the PPN, changing your child's behavior almost overnight. Or if the child already experiences OCD and the like, his or her symptoms are sharply elevated, noted the PPN.

If the infection is still present, it is likely treated with antibiotics, as stated by the NIMH, but sometimes with IVIg, according to the PANDAS network. If the infection is no longer present, the child may benefit from the same therapies as other children with neuropsychological disorders suggested PPN, like behavioral and cognitive therapy.

Even with all that information, the consensus on whether PANDAS is a big deal just isn't there, yet. This is one of those cases where conflicting opinions rule the issue. The American Academy of Pediatrics Red Book has yet to recognize it as a disorder with enough evidence to consider it as a proper diagnosis, but the NIMH put forth a compelling set of guidelines and research that at least deserves much greater study. Right now, parents need to keep an open dialogue with their kids' pediatricians and stay as vigilant as possible about their health, while making sure to remain educated and informed. Ask questions. Take notes. And trust your gut.