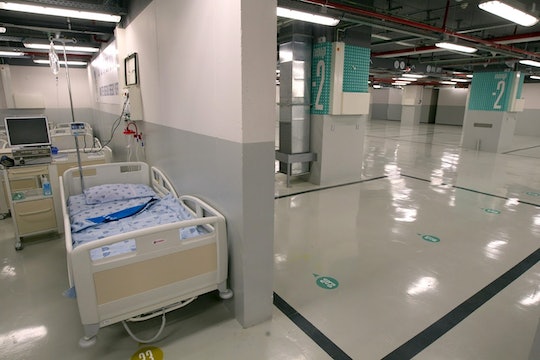 What Is 'The Choking Game? It's Making Headlines for A Terrible Reason

He had just started the sixth grade. I'm sure everyone remembers how great grade six could be. It felt like the last year of true childhood — old enough to have a little freedom, young enough to still be a kid. Garrett Pope Jr. will never get to know how it feels to enjoy the last flush of childhood. All because he played a game that got out of hand, and he died as a result of it. The game he was playing, called the "choking game" is a recent, incredibly dangerous fad with kids, and it's clearly getting out of hand.

The choking game is exactly what it sounds like: A person ties something around their neck (a scarf, a rope, a belt, anything that will cut off their air supply) and it's tightened until they pass out. The purpose of the "game?" To experience a "brief sense of euphoria." When kids are playing the choking game, they are meant to pass out and then come back, awake, feeling euphoric. However, in Garrett's case, the game went too far.

According to authorities, Garrett was reportedly playing the game alone in his South Carolina bedroom and was found dead from accidental asphyxiation on Wednesday. He was only 11-years-old. His mother, Stacey Pope, spoke to local media news outlet The Rocky Hill Herald after her son's death, and urged parents to talk to their kids about the very real dangers of the choking game:

I should have pushed it further. If you talk to your kids and they said they don’t know about it, don’t stop there. You educate them on what it is, it’s not a game and it can kill you.

Unfortunately, Garrett's death is not the first time a child has lost their life to the choking game. In 2015, 13-year-old Memphis Burgess of Colorado Springs lost his life to the same, terrible game. His parents found him in a closet with a rope, choking to death on his knees.

Since 1934, approximately 1,000 kids have died from accidental asphyxiation associated with the choking game, according to GASP, an advocacy group trying to end the game's eerie popularity — and its popularity seems to get steadily stronger all the time, particularly with the advent of social media. According to a report by The Washington Post, some middle schoolers are posting videos of themselves playing the game on YouTube and are naturally lapping up the attention.

The choking game has been around for decades, with a report being released in 1951 from the British Medical Journal about a game called "The Fainting Lark," which described the process:

A boy would sit on his haunches, take 20 deep breaths, then stand and plug his nostrils with his fingers and attempt to blow out deeply. The effect would allegedly make the teen pass out for a minute or two, purportedly for the amusement of his friends.

While the choking game has made a name for itself as the "good kid's high", according to Salon, it's a dangerous practice that persists in being misunderstood by kids. The only way to educate kids is to talk to them about the severe, life-ending consequences of that game. Hopefully parents don't have to experience the game's effects the same way that Garrett's parents did.