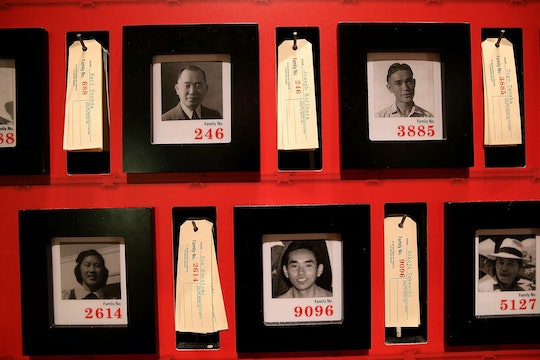 Why The Day Of Remembrance Is So Important

On Feb. 19, 1942, President Franklin D. Roosevelt issued executive order No. 9066. While this executive order seriously impacted 120,000 American citizens, its anniversary often goes unnoticed by large swaths of Americans today. For others, though, Feb. 19 is a day of contemplation and recognition. The Day of Remembrance marks the anniversary of the internment order that sent hundred of thousands of innocent Japanese American to internment camps during World War II. It's been 75 years since Roosevelt signed the executive order, but the lasting impacts of his decision are still being felt today.

President Roosevelt signed executive order No. 9066 after Pearl Harbor was bombed by the Japanese during World War II. The order gave the U.S. Army to ability to designate large amounts of land as military zones, as well as evacuate any person from those lands as they saw fit. While the order didn't expressly state that it was created to imprison Japanese-American citizens, it quickly became clear what the Roosevelt administration's intentions were. The Army removed an estimated 120,000 Americans from their homes, jobs, and everyday lives, reportedly for "having the face of the enemy," according to the Japanese American Citizens league.

George Takei, an actor known best for his portrayal of Hikaru Sulu on the television series Star Trek, was a 5-year-old kid growing up in Los Angeles, California in 1942 when his family was taken from their home. In a column for CNN, the actor described the day armed U.S. soldiers arrived at his home and ordered his family out. "We were permitted only what we could carry, no bedding, no pets," Takei wrote. "I remember my mother's tears as she and our father gathered us up, with our precious few belongings in hand." Takei and his family, along with thousands of other Japanese-Americans, were forcibly taken to internment camps as a result of Roosevelt's executive order. He and his family would remain in a camp for the next four years.

Takei writes that the importance of Remembrance Day is to "make sure what happened to us never happens again in America." But despite his and many other's great efforts to speak out about the Japanese internment in America, Takei is worried that "we are careening toward a future where such a thing would again be possible." Members of the Trump administration, specifically, have spoken about the 1942 internment, with one aide even citing it as a precedent for a potential registration of Muslim-Americans in a database.

While a Muslim-American database has, thankfully, not come to pass, the current administration has already signed executive orders that single out certain people simply for being Muslim. The same kind of misplaced fear that lead to the internment of 120,000 innocent Americans 75 years ago appears to be the driving force behind Trump's travel ban against several Muslim-majority nations. Takei knows that the only way to stop history from repeating itself is to keep talking about what happened and educating people about what happened here 75 years ago.

For now, the Day of Remembrance marks a dark occasion in U.S. history — one that, as Takei and so many others have expressed, should never happen again.

More Like This
20 Impactful Documentaries To Stream During Black History Month & Beyond
20 Incredible Movies To Watch With Your Family During Black History Month & Beyond
Barbie Honors Aviator “Queen” Bessie Coleman In Their Inspiring Women Line
Marie Kondo Gives Up Tidying Post-Kids, Sparking Joy For Moms Everywhere
What Parents Are Talking About — Delivered Straight To Your Inbox