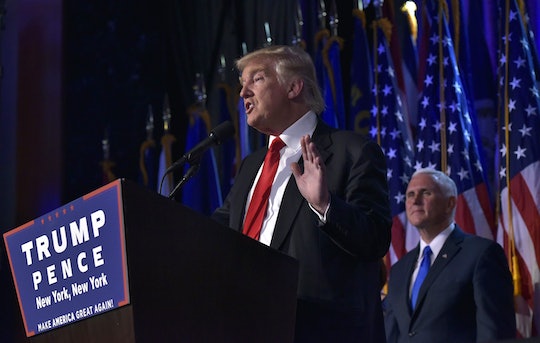 What Is The Impeachment Process? It's Complicated

It's the sting felt around the world. Whether you were a Donald Trump supporter or not – his win is undeniably stunning, but, really, it's concerning for many. As people across the country grapple with a Trump presidency — after he was a candidate who notably spewed discriminatory rhetoric throughout his campaign, it's no wonder the term "impeachment" has shown up on social media — and Google searches since Trump's historic win. In case you are wondering about the process, (clearly, this election has taught us anything and everything is possible... so why not) it entails a few important stages. So what is the impeachment process exactly?

As the NCSL describes it, the House assembly first develops a "formal accusation or statement of charges" against a president. Once accusations are investigated, the House votes on the charges to decide whether misconduct occurred. But as About News describes, the House Judiciary Committee first has to decide whether to begin a formal inquiry for impeachment, and the chairman of the committee must propose a Resolution to do so. As Politico senior policy reporter Darren Samuelsohn explained, House Speaker Paul Ryan would have to "...make the crucial call to even let the impeachment proceedings get off the ground" in a hypothetical-Trump-impeachment case.

If the House votes in favor of the charges, then the "articles of impeachment" or charges, are forwarded along for the next stage, which is usually assigned to Senate.

What comes next is the decision to convict.

Here is the NCSL's description how the impeachment process works within the Senate:

The second stage is the formal consideration of the charges laid out in the articles of impeachment, and the responsibility usually is assigned to the “upper” legislative body, i.e., the senate. This stage resembles a trial; both sides may call witnesses and present evidence. When the presentation of arguments is completed, the body must vote whether to find the person guilty of the charges, and a supermajority vote typically is required to convict the accused.

But as Samuelsohn reported, impeachment plans for the presumptive president-elect Trump would not come easy. After interviews with Congress, formal Capitol Hill administration and presidential campaign aides, Politico arrived at the following conclusion on the likelihood of a Trump impeachment, according to Samuelsohn's report:

...It would take an unprecedented mix of popular sentiment and raw power politics at the very highest levels to actually succeed at toppling a new president, and it’s far from certain that even Trump could manage to be so offensive that he clears that bar.

But for the countless people who are worried about the Trump presidency to come, as many noted on Twitter, an impeachment for Trump would land Mike Pence, vice president-elect, the role as president – and his stances are significantly worrisome for anti-Trumpers as well.

One Twitter user wrote, "For any of you hoping for a Trump impeachment to solve this, you have clearly read nothing about Pence."

With Trump's victory, there are a lot of questions circling around about the future of this country. But one thing is for certain (and needs a lot of sinking in): Trump is the president-elect.