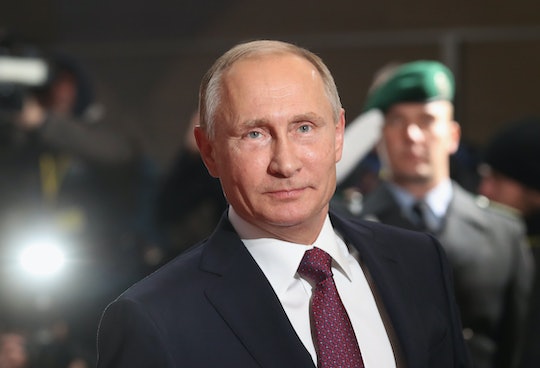 Considering Donald Trump's apparent resolution to dismiss the U.S. intelligence community's assessment that the Russian government may have allegedly worked to guarantee his presidential election win, it's easy to get jumpy about any favorable treatment of the foreign adversary coming from the White House right now. But the fact that the U.S. Treasury on Wednesday tweaked the sanctions against the Federal Security Service, one of the spy agencies believed to have been involved in the influence campaign aimed to aid Trump's victory, actually doesn't necessarily indicate a bowing to Russia. Although the Russian FSB is undeniably a hostile actor when it comes to this country's interests, working with it is a necessity for some American companies based in Russia — and the clarification simply ensures that's possible.

Essentially, the FSB is absolutely no friend of the United States. But it does regulate all technology imports to its country, meaning that a likely unintended consequence of the sanctions President Obama slapped on it last year in the wake of the election hacking revelations was that American traders couldn't do business the way they needed to. In fact, Reuters reported that the amendment like the one made to the Obama sanctions — which permits American businesspeople to pay the FSB up to $5,000 per year for authorization to import some software and IT equipment — are fairly commonplace.

"I haven't eased anything," Trump reportedly told the AFP after the change in the terms of the sanctions was announced, and he may just be telling the truth. Even officials who previously worked for the Obama administration noted that allowing the payment for the permits did not signal a shift in the overall tone of the United States' stance on the FSB in terms of the repercussions for its having allegedly hacked the Democratic National Committee's email servers pre-election servers last year. "I don't think when they sanctioned FSB they were intending to complicate the sale of cell phones and tablets," former State Department official and sanctions expert Peter Harrell told Reuters.

Still, that doesn't mean the American public should let down its collective guard when it comes to Trump and Russia's president, Vladimir Putin. The newly minted commander in chief has said publicly said both that he does and does not have a relationship with with Putin, evoking serious questions about what type of influence the other world leader may have over him. An explosive but unverified dossier compiled by a British intelligence agent that BuzzFeed News recently published just before Trump's Jan. 20 inauguration alleged that the Russian government had assembled blackmail materials to lord over Trump. Trump has vehemently denied this.

The two connected over the phone Saturday, a conversation that reportedly went well. "The two leaders emphasized that joining efforts in fighting the main threat — international terrorism — is a top priority," according to a summary of the call the Kremlin released afterwards. "The presidents spoke out for establishing real coordination of actions between Russia and the U.S. aimed at defeating ISIS and other terrorists groups in Syria."

Of course, improving the country's relationship with Russia is certainly a worthwhile endeavor. But it would be foolhardy to do so at the expense of American interests, or to allow Putin to commandeer the upper hand. Because of Trump's tendency to express admiration for Putin and dismissal of the U.S. intelligence community's assessments regarding the election-time cyberattacks in the other man's favor, though, it's hard to trust that won't happen, or that it hasn't already.

This change to the sanctions is just one of the many, many interactions the United States will have with Russia over the next four years. It's also very likely one of the most benign.