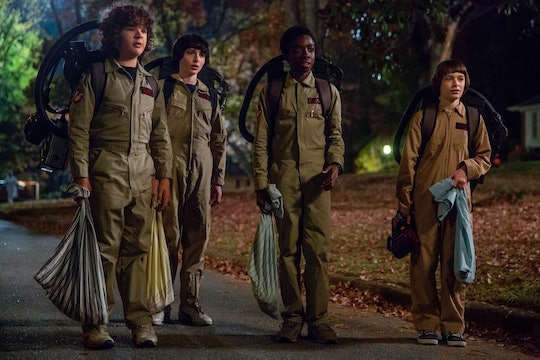 Here's Everything We Know About 'Stranger Things' Season 3 So Far

The second season of Stranger Things covered a lot of ground in just nine episodes: old foes were defeated, new ones were introduced, and viewers finally learned how Steve Harrington got his hair to do that thing. It wrapped up nearly every storyline by the finale, so what will Stranger Things Season 3 be about? What ground is there left to cover? As it turns out, there's plenty left to explore both in Hawkins and in the Upside Down. With two to three more seasons to come, Stranger Things still has a lot of stories to tell.

Season 3 is currently being planned, which means a lot of things are subject to change as the story evolves, but series creators Matt and Ross Duffer definitely aren't short on ideas. They had so many plans for Season 2 that they ended up having to defer some of them to future seasons. But according to an interview with Screen Rant, it was important for them not to repeat the first season finale's multiple cliffhangers; instead, they wanted to begin Season 3 with a clean slate, though there are still some lingering threats. So here is everything there is to know about Season 3, even if some of it ends up being altered down the road.

The Mind Flayer Will Be Back

The final shot of the Shadow Monster swirling above the school was, as Ross Duffer told The Hollywood Reporter, a "hint at what's to come." The monster has been pushed back but not defeated, which means it will return to settle the score. And after encountering Eleven during the closing of the rift, it's very curious about the kids who locked it away.

A year passed in between the first and second seasons of Stranger Things, and the same will happen between Seasons 2 and 3. The young actors who star in the series are growing up and the Duffers decided to embrace that, working it into the show. "Even if we wanted to hop into the action faster, we couldn't," Matt Duffer told THR. "Our kids are aging. We can only write and produce the show so fast. They're going to be almost a year old by the time we start shooting Season 3. [...] It forces you to do a time jump. But what I like is that it makes you evolve the show. It forces the show to evolve and change, because the kids are changing."

Though Noah Schnapp, the actor who plays Will, thinks the character's connection with the Upside Down is still ongoing, the Duffers disagree. In another interview with THR, Matt said, "I feel like we really put Will through the wringer and maybe now we're going to give him a break at least."

When Eleven was on her vengeance mission with Kali, one of the guards from Hawkins Lab indicated that Dr. Brenner was still alive. Though he appeared to die at the end of Season 1, his death didn't actually happen on screen — the camera cut at just the right moment. If he's still out there, then he could be back.

Speaking of Kali, that definitely wasn't the last viewers will see of Eleven's sort of sister. They have some unfinished business to address for sure. Plus, there are still all the other children who were experimented on in Hawkins who might come into play down the line. Executive producer Shawn Levy told E! News, "I think we've clearly implied there are other numbers, and I can't imagine that the world will only ever know Eleven and Eight."

That's only a fraction of what might come to pass in Stranger Things Season 3, which means it's bound to be a fascinating season. I can't wait!