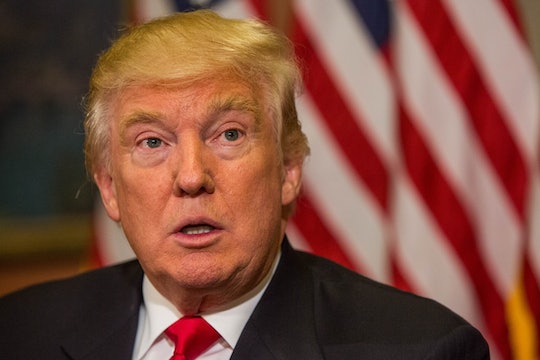 What Will Trump Change? 6 Major Shifts Americans Can Expect

President-elect Donald Trump ran on a platform of change, a message that clearly resonated with enough Americans to win him the presidency on Nov. 8. As a candidate who touted anti-abortion policies, claimed climate change was a Chinese hoax, and proposed banning all Muslims from entering the country, many Americans are now wondering how exactly a Trump presidency will transform the United States. In other words, what will Trump change after Inauguration Day?

A lot, one could assume, if Americans are to judge based on Trump's campaign promises. "As I've said from the beginning, ours was not a campaign but rather an incredible and great movement," Trump said during his victory speech, delivered in New York on Nov. 9. "Working together, we will begin the urgent task of rebuilding our nation and renewing the American dream."

For Trump, "renewing the American dream" includes promises to update the United States' infrastructure, "put millions of our people to work," double the country's growth, and play nice with "all other nations willing to get along with us." But once you look past Trump's victory speech and focus on actual policies Trump can affect, what will the United States look like?

Here are a few important areas Trump might impact:

According to Fortune, Trump vowed to nominate Supreme Court justices who would work to overturn Roe v. Wade, which would allow states to decide individually whether women were able to get abortions. He also promised to sign the Hyde Amendment — which bars federal funds from being used for abortions — into permanent law.

Trump has also promised to defund Planned Parenthood if they continue to perform abortions, and if Trump keeps his promise to repeal the Affordable Care Act, millions of women could lose coverage of their birth control.

On the bright side, Trump also said in September that he would like all mothers to have access to a guaranteed six weeks of maternity leave, according to The Washington Post, which would benefit mothers across the country.

Bad news for the environment: Trump once tweeted that climate change was a hoax "created by and for the Chinese" so that they could infringe on the United States' manufacturing industry. Worse news for the environment? In February, Trump said he wanted to dismantle the Environmental Protection Agency, saying in a debate, "Environmental protection — we waste all of this money. We’re going to bring that back to the states."

To top it all off, Trump named another climate skeptic, Myron Ebell, director of the Competitive Enterprise Institute's Center for Energy and Environment, to head up the Environmental Protection Agency's transition. And despite the ratification of the Paris climate agreement earlier this month — which binds the United States to taking action to keep global temperatures down for the next four years — Trump has said he would "cancel" the agreement within 100 days of taking office. He would also cancel the Clean Power Plan, which attempts to limit the country's CO2 emissions.

If Trump keeps his climate promises, according to The New York Times, he could make global targets unattainable, even if all other countries followed through on their end.

Under a Trump administration, the United States could potentially not come to its allies' aid when they're in need. In July, when asked if he would come to Baltic states' aid against a Russian attack, Trump answered, "If they fulfill their obligations to us, the answer is yes." (Usually, the answer to a question like that isn't conditional.)

Trump also said he would likely hold back on intruding on countries where civil liberties were being attacked. "I don’t think we have a right to lecture," he said, according to The New York Times. "Look at what is happening in our country. How are we going to lecture when people are shooting policemen in cold blood?"

According to New York Magazine, Trump could easily (and quickly) redact the Deferred Action for Childhood Arrivals program after taking office. The DACA program protects those who were brought illegally to the United States as children from being deported.

According to Bloomberg, Trump could also begin involving cities' local police in enforcing immigration rules, and change guidelines to make visas harder to obtain. In the past, he has also promised to create a force to deport over 11 million undocumented immigrants and vowed to ban Muslims from entering the country.

According to the BBC, Trump has threatened to leave the North American Free Trade Agreement, which allows free trade between Mexico, the United States, and Canada — a massive move. He has also suggested pulling the country from the World Trade Organization, and has considered taxing imports at a high rate from countries like China and Mexico in order to discourage American companies from moving manufacturing jobs outside of the United States.

On his campaign website, Trump promised to repeal the Affordable Care Act, allow Americans to buy insurance across state lines, and let people claim health insurance premiums on their tax returns. According to WFPL, Trump's healthcare model could increase out-of-pocket insurance costs for Americans, and premiums would vary by state.

Under a Trump administration, Americans can expect a great many changes — but these are a few that Trump has promised to begin working on without delay after Inauguration Day. In the future, Americans can also expect to see changes in criminal justice, gun control, foreign policy, tax regulations, and national security. As Trump prepares to enter the White House and settles on his transition team, more details should also emerge on Trump's proposed changes.