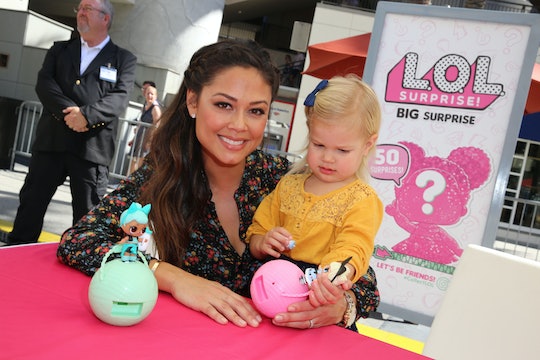 In a pretty surprising move by Dancing with the Stars, Vanessa Lachey and Nikki Bella were eliminated from the show with no warning in a dreaded (and unexpected) double elimination round. But Lachey had (and still has) a lot of fans following her turn on the show. So you may be curious to know what Vanessa Lachey will do after DWTS. Well, not to worry friends. Lachey has got plenty still to keep her busy, not least of which are her three tiny children who are, of course, absolutely adorable and probably a lot of work — as tiny children tend to be.

By now everyone is probably aware that in addition to Tango-ing her heart out on Dancing with the Stars, Lachey has been hosting the newly formed show Top Chef Jr. on Universal Kids in which she and head judge Curtis Stone Jr. work together to crush the culinary dreams of small children. (OK fine, it's a cooking competition show starring kids who probably don't remain crushed for all that long, but you get the idea.) Lachey has gushed about her experience on the show, so maybe hosting children's competition shows is the direction her career will take next.

In an interview with People Lachey said, "It’s a dream job... These kids act and cook just as if they were seasoned chefs—but without the ego. Their imagination is through the roof, and their excitement is so contagious." In addition to her infectious energy, Lachey brings her parenting skills to the show — skills honed by raising her three aforementioned children. With this kind of skill and experience, if the show does well, I wouldn't be surprised if Lachey stuck around with this gig for years to come. After all, combining children and hosting seems like the perfect opportunity for her.

As for the immediate future, from the looks of things Lachey is living her very best life. After her elimination, she posted on Instagram her feelings about the experience, which were overwhelmingly positive. The caption began with "My heart is FULL," explaining that she loved her experience on the show. She finished by saying "Maybe we didn't get the mirror ball... but I think we definitely won!"

The caption accompanied a picture of Lachey on the couch with her three kids, suggesting that the proud mama is happy to be home with her babies for the moment. Later social media posts show Lachey at Disney World with her family for Halloween (an excellent idea), dancing on the set of Top Chef Jr. (with the comment "Still dancin!!! Well, sort of!"), and celebrating her shared birthday with her husband Nick Lachey. So yeah, I'd say she's doing just fine at the moment.

As far as her ex-dancing partner Maks Chmerkovksiy, he has also been extremely gracious following their exit from the show. Despite the rumors that Chmerkovskiy and Lachey didn't get along, the pro dancer posted a goodbye to Lachey that was nothing short of precious. He posted a picture of the two of them during their last performance with this accompanying caption:

Last night was a movie and you were every bit a starlet. We worked our asses off for every single step and I’m proud of every single step we’ve taken together. Thank you for your effort, dedication and your relentlessness. You stood tall, put on a show and kept up with the best of them! I’m very much a proud partner, coach and a friend. This was one of the most eventful seasons I’ve ever had and, if it were my last, I wouldn’t want this journey to end any other way.

So basically, I wouldn't worry about Lachey at this point. It looks like she's still killing it.