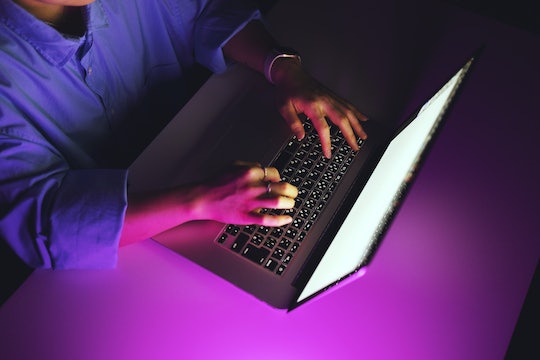 Here's What You Should Know About The Viral #SaveTheChildren Hashtag

At first glance, a call to #SaveTheChildren seems to be an innocent, well-intentioned awareness campaign centered around saving kids from human trafficking. But upon closer inspection, the hashtag that has gone viral across social media networks in recent weeks isn't the anti-human trafficking public service announcement many think it is. So just what is #SaveTheChildren about? The hashtag has been linked to QAnon, a pro-Trump conspiracy theory group.

Perhaps you've recently seen a post or two on social media highlighting some of the statistics behind human trafficking and asking you to #SaveTheChildren. Perhaps those posts have even been published by your friends or by someone in your mom group. But while some posters using the hashtag may be honestly hoping to draw attention to the issue of human trafficking, the #SaveTheChildren hashtag has, over the last few weeks, been largely been co-opted by conspiracy theorists, according to Rolling Stone. Their posts, however, revolve around spreading unproven or debunked accusations of pedophilia involving Democratic politicians and celebrities.

While the accused may differ from post to post (Hillary Clinton, Joe Biden, and Chrissy Teigen appear to be favored targets, however), each post centers around allegations that many prominent Democrats are pedophiles involved in an international ring that traffics children and eats them. Yes, you read that right — eats them. In July, BuzzFeed News reported that QAnon members had even alleged that online furniture retailer Wayfair was trafficking children under the guise of expensive cabinets listed under human names.

According to The New York Times, the posts are QAnon's latest attempt at drawing in new members. "The idea, in a nutshell, is to create a groundswell of concern by flooding social media with posts about human trafficking, joining parenting Facebook groups and glomming on to hashtag campaigns like #SaveTheChildren, which began as a legitimate fund-raising campaign for the Save the Children charity," The Times' Kevin Roose wrote. "Then followers can shift the conversation to baseless theories about who they believe is doing the trafficking: a cabal of nefarious elites that includes Tom Hanks, Oprah Winfrey and Pope Francis."

In recent weeks, the #SaveTheChildren hashtag became so saturated with unproven or debunked conspiracy theories that Facebook moved to temporarily block the hashtag on its network earlier this month. According to Heavy.com, searches for the hashtag brought up a message stating it had been "temporarily hidden" due to violations of Facebook's community standards.

Facebook later told Rolling Stone that although it had lifted its ban on the #SaveTheChildren hashtag, it planned to continue monitoring posts under the hashtag. "We temporarily blocked the hashtag as it was surfacing low-quality content," a Facebook spokesperson told the magazine. "The hashtag has since been restored, and we will continue to monitor for content that violates our Community Standards."

Even Save The Children, a long-standing children-focused international charity, felt the need to distance themselves from the hashtag bearing its name. "We have been protecting children around the world for over 100 years," the charity tweeted earlier this month. "While many people may choose to use our organization's name as a hashtag to make their point on different issues, we are not affiliated or associated with any of these campaigns."

But while a heightened public awareness of the dangers of human trafficking could result in greater action to combat actual human trafficking, it's also been proven that QAnon conspiracy theories have already clogged up important anti-human trafficking resources like the National Human Trafficking Hotline. In a press release issued July 20, Polaris, the nonprofit that runs the hotline, said an "extreme volume" of calls regarding online posts about Wayfair had "made it more difficult for the Trafficking Hotline to provide support and attention to others who are in need of help."

"We strongly encourage everyone to learn more about what human trafficking really looks like in most situations, and about how you can help fight trafficking in your own community," the nonprofit said.

Unfortunately their request has not stopped QAnon members from flooding the #SaveTheChildren hashtag with conspiracy theories.