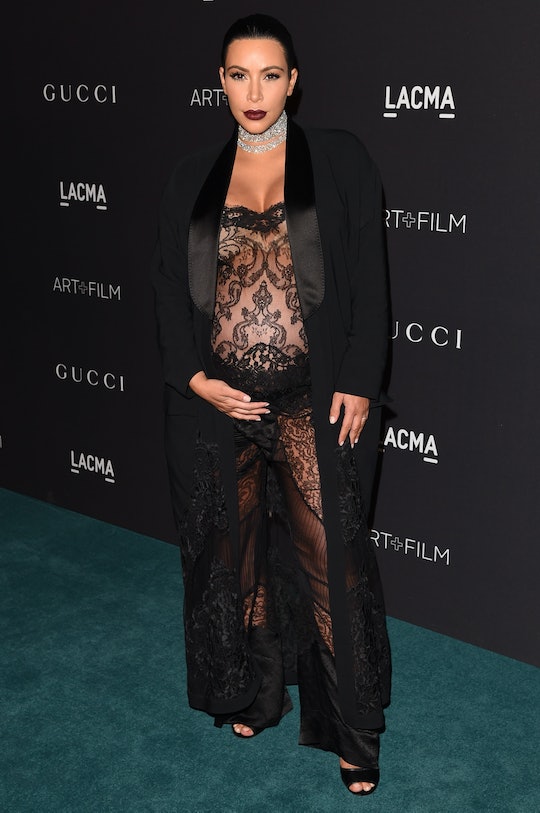 When Is Kim & Kanye's Baby Actually Due? Hard To Say

It’s probably going to be a very merry Christmas for the Kardashian family — Kim and Kanye’s son is still due on Christmas Day, even after she revealed that she had an EVC (or an external cephalic version) to get her baby out of the breech position this weekend. When exactly Kimye baby #2 is arriving has been up in the air for a couple of weeks now. There were early reports that Kim was going to induce labor by Thanksgiving, but then she announced last week that the baby was breech, and that plan went out the window.

Luckily, the procedure went well. ECV works just about half of the time, but not because it's not safe, just because sometimes those little guys are stubborn and won't turn. If a baby doesn't budge, doctors sometimes have to go in for an emergency C-section, which is precisely the thing Kim was trying to avoid by having the procedure in the first place.

She wrote on her website today that the procedure was very painful:

They gave me an IV with medication to relax my uterus, and then three doctors attempted to work together to turn the baby. There was a risk that my water might break or the baby's heart rate could drop — in which case, an emergency C-section would then take place. I went in with my sisters and my husband. I was prepared for it all! They don't give you any pain medication, and let me tell you: This was soooooo painful. Probably more painful than childbirth. BUT it worked!!!

That sounds absolutely dreadful, but the rest of Kim's pregnancy should carry on as planned for now. In the meantime, the Internet is ready for him:

Just in the name of stopping all of the bad Yeezus jokes, let’s hope he shows up a few weeks early like North.