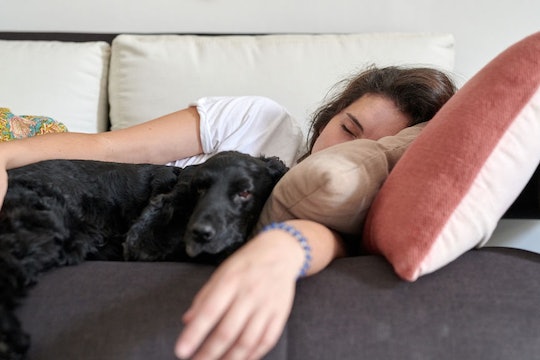 National Napping Day Is A Thing, & It Is So *Perfectly* Timed

The end of sanctioned naps after kindergarten is an injustice, and I won't stand for it any longer. National Napping Day 2019 is on March 11, and I say we all band together to bring back unified afternoon sleep sessions for the day. Sure, 2-year-olds probably need a midday rest more than 20-five-year-olds do, but there's no denying everyone feels better after a quick post-lunch respite.

National Nap Day isn't an official holiday, but that doesn't make it any less important. It always falls on the Monday after Daylight Savings Time according to Time and Date, which is Sunday March 10 this year 2019 per the The Independent, hopefully giving you back that hour of sleep you'll lose when the clock springs forward. National Day Calendar calls March 11 the drowsiest day of the year, so it's time to start planning when you'll take your afternoon lie-down. I don't have the power to make your boss cool with a quick snooze under your desk that day, but I do highly suggest you partake in the celebration of siestas if you can swing it. Sleep deprivation is rampant in the U.S., — 35 percent of Americans don't get enough sleep according to The Good Body — and the longterm health effects of consistently missing out on rest are frankly pretty dire.

You're probably familiar with some of the more obvious impacts of sleep loss on your health, like feeling tired or struggling to pay attention, but it impacts your overall health as well. Sleep deprivation can lead to irritability (especially in kids and teens) and anxiety, and it can increase your risk for things like high blood pressure, heart disease, obesity, and diabetes according to the National Institute of Child Health and Human Development. And as reported in Science News, the National Health Interview Survey found that Americans are sleeping less today than they did 13 years ago, so clearly we are all pretty much in need of a nap.

All of those scary side effects are the reason the National Sleep Foundation promotes the importance of "sleep hygiene" — basically a fancy term for the steps you should be taking to ensure you're getting that adequate and restful eight hours. It includes everything from creating an optimal sleeping environment to avoiding certain foods before bed that are known to interrupt your REM cycle. You can check out their full list of sleep hygiene tips on their website, and yes, napping is one of their recommendations.

But note that the NSF cautions against napping too much. Although they report that a quick snooze for even half an hour "can help to improve mood, alertness and performance," naps can also have a negative impact: they can make you feel even more tired, and resting for too long can totally mess with your nighttime sleep schedule. The key is to limit your naps to short 20 to 30 minute spurts, as longer siestas have been known to be linked to "sleep inertia, which is the period of grogginess that sometimes follows sleep," the NSF explains.

All that being said, you should definitely still make time for a nap on March 11, but make sure you don't go overboard and block out the whole afternoon. All you need is a solid 20 minutes and a snuggly spot.

More Like This
Baby Growth Spurts: When They Happen & What To Expect
How Many Elves Does Santa Have?
How To Make Santa Footprints
19 Holiday Gift Ideas Perfect For Your In-Laws