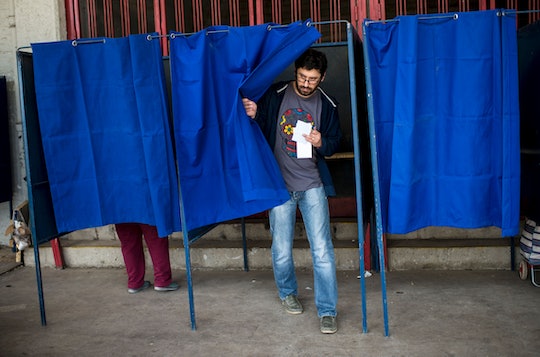 When Will California's Election Results Be In? The East Coast Won't Be Up Late

Many of us are eager to see this election come to an end. With every media bombshell we've seen in recent weeks concerning Hillary Clinton's emails or Donald Trump's ties to Russia, the end of the election has felt closer, and yet, somehow, further away. But in a countdown to the end, each hour counts. How many hours are there exactly until the election is over? That depends partly on some states, like California, that run behind the East Coast time-wise. So when will California's election results be in?

California's polls will close at 8 p.m. on Election Day, according to Ballotpedia. But that's local time. So all of us along the East Coast, including New York and Washington, D.C. will have to wait until at least 11 p.m. to find out election results from California and the other West Coast states, Oregon and Washington. But there's still another state we'll need to wait to hear from: Alaska. We'll know Alaska's results after midnight Eastern Time. It's important to remember that some voters could still be voting after the official poll closing time if they were in line before polls closed. And obviously, precincts will need some time after polls close to finish counting ballots. So the aforementioned times are really earlier than we can expect to hear the states' final results. It could take hours after 11 p.m. or midnight to hear their official counts.

Luckily for us, most of these states are not considered battleground or swing states. That means we can likely guess which way they'll go before their official counts come in. And these guesses can help media organizations and political experts project a winner before official counts have been released, which is great because it means we can all go to sleep early! California, Oregon, and Washington are known as blue states, and are all strongly projected to vote in favor of Clinton. According to the Los Angeles Times, the last time California didn't go blue was way back in 1988, when it voted to elect Republican George H. W. Bush as president. So most are somewhat sure of how the state will vote. And with 55 electoral votes, it's an important state to have on your side.

Alaska was originally thought to be as sure a bet for Republicans as California is for Democrats, but recent polls actually showed Clinton with a 4-point lead in the state, according to The Hill. This is really surprising considering the first and only time Alaska went blue was in 1964. Still, with only three electoral votes, Alaska's results likely won't be a deciding factor for either candidate.

All this is to say that, hopefully, we won't have to wait much later than 11 p.m. Eastern time to find out who our next president will be. Of course, if Trump decides to contest the outcome of the election, it could be days before the public knows who won the race. Let's just hope we don't pull a 2000, when it took a literal month to figure out who won. I don't think anyone could handle that.