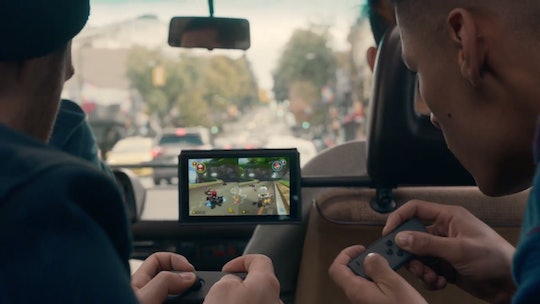 When Will The Nintendo Switch Be Released? The Console Is (Literally) A Game-Changer

On Thursday morning, Nintendo released a trailer for it's next game console: Nintendo Switch. The Switch may be set to revolutionize gaming by allowing gamers to easily alternate between portable and home gaming, and has several groundbreaking features. When will the Nintendo Switch be released?

The trailer revealed that the Nintendo Switch will arrive in March 2017. Nintendo announced that it was developing a new console — which it coded Nintendo NX — way back in the spring of 2015. After the announcement for the Switch was made earlier Thursday, gamers everywhere have shown their support and excitement.

The main appeal of the Switch is the flexibility it will allow gamers. “Nintendo Switch allows gamers the freedom to play however they like,” President and COO of Nintendo of America, Reggie Fils-Aime, said in the press release for Nintendo Switch. “It gives game developers new abilities to bring their creative visions to life by opening up the concept of gaming without boundaries.”

As Paul Tassi over at Forbes noted, the Switch improves upon the Wii by taking the "one thing everyone loved about the Wii U gamepad, the ability to play games off-screen when needed, and expanded the concept to make a fully mobile home gaming console."

The Switch may also be a game-changer because Nintendo's most recent consoles have been considerable failures, according to Business Insider. The Wii U, which was released in 2012, has sold just a fraction of what the Wii has, and GameCube is Nintendo's second-worst performing console. Because these consoles didn't perform well, many publishers and developers didn't create games to go along with them.

But that's far from the case for the Nintendo Switch. Nintendo has rallied the support of a large list of publishers and developers, including Activision, Atlus, Bethesda, Capcom, EA, Epic Games, Konami, Square Enix, and Ubisoft.

The full list of Nintendo's partners for the new console can be found here.

The Nintendo Switch will be have a Nvidia graphics processing unit and "custom software," which Nvidia confirmed this morning. Another feature is that the console has detachable controllers (called Joy-Con controllers). The Joy-Con controllers can be used by a single player or split between two players using the same device.

The console is even more flexible because it comes with a kickstand but can also be handheld. The trailer shows two teams set to compete in a tournament using the device, which hints that Nintendo plans to cater more to sports fans.