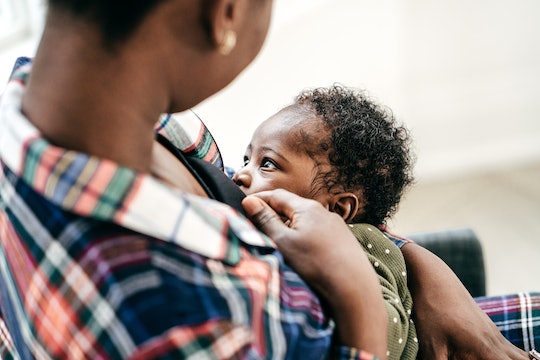 “One of the things that we've learned from talking with moms who are breastfeeding is that they oftentimes stop because they didn't have the support they needed,” says Melanie Williams, associate vice president of Delta Health Alliance, a nonprofit organization in Leland, Mississippi. “Sometimes they had questions that they couldn't get answered or encountered a challenge that there was an easy fix for — if only they'd had someone they could have turned to for help.”

Formed in 2001, The Delta Health Alliance works to increase access to health care services in the Mississippi Delta. Williams says their approach to addressing racial breastfeeding disparities is to “create a culture for breastfeeding where the community is informed about the benefits of breastfeeding and women have the support and resources they need to successfully breastfeed.” A change of culture and the support of an entire community is beneficial to all mothers, but the impact of such a shift for Black mothers could potentially save lives.

One of the mothers in the study said that nursing rooms in stores are only something you see in white neighborhoods.

Among many other studies, research from 2018 in the Journal of Obstetric, Gynecologic, & Neonatal Nursing showed that though breastmilk has benefits that are specifically critical for Black infants who are at higher risk of many conditions including death, Black women did not breastfeed for reasons other than their own desires. The women noted juggling too many responsibilities, lack of information provided during pregnancy, shame associated with feeding in public, and lack of familial support as reasons they couldn't breastfeed. One of the mothers in the study said that nursing rooms in stores are only something you see in white neighborhoods. To meet those needs, Delta Health Alliance partnered with the BUILD Health Challenge grant program to support the Let’s Talk Baby Café, the Delta chapter of Baby Café USA, a national nonprofit that supports the development of licensed U.S. Baby Cafés across the country.

Pre-COVID, the Let’s Talk Baby Café, situated in the predominantly Black Sunflower County area of Mississippi, offered a drop-in refuge where moms could come and nurse their babies, relax, and often get direct support from each other as well as lactation experts. Now, Melanie says the program has taken to the Zoom version, which has surprisingly grown to include people who might not otherwise participate. “A lot of support people are joining in the conversation,” she says. “Dad might not have gotten dressed to come with Mom down to the cafe, but now will join in the conversation there at the house on the computer with the family.”

Over in Louisiana, the New Orleans Breastfeeding Center, a Black-woman led infant-feeding support organization, and the New Orleans’ Birthmark Doula Collective take a similar community support approach to help increase Black breastfeeding rates. The organizations, both founded by Latona Giwa, BSN, RN, IBCLC, are working to change the course of the poor maternal and infant health outcomes in New Orleans with a community effort.

The infant mortality rate in Louisiana is the second-highest in the nation behind Mississippi. In the majority Black city of New Orleans, access to quality health care is slim and health inequities are rampant. “We know that these families and women of color in New Orleans continue to face significant multi-level barriers around breastfeeding that can contribute to racial health disparities like infant health, so our goal is to decrease those infant mortality rates,” says Victoria Williams (no relation to Melanie), program manager at New Orleans Breastfeeding Center and Birthmark Doula Collective. An innovative cornerstone of the center’s mission to improve health outcomes for Black mothers and babies is their work in Columbia Parc neighborhood, home to the largest housing development — and the worst infant outcomes — in the state, says Victoria.

Partnered with five different area organizations, including hospitals and clinics, the team is doing its part to help revitalize the area. The housing development is now mixed-income housing, complete with an early childhood center, a senior area, elementary through high school, a clinic, and soon a grocery store, shares Victoria. “They're trying to meet all those needs,” she says. With these social determinants of health — housing, education, and economic factors — addressed, the New Orleans Breastfeeding Center and Birthmark Doula Collective is integrated into the fold to directly provide the maternal and infant health care needs of the community.

Victoria, who has a master's degree in social work, believes in this type of multidisciplinary approach all around. If a breastfeeding mom or doula client appears to have a medical need, like high blood pressure, she says they'll call the midwife or the doctor so they can take it from there. “I'm all about wraparound services,” she says. “I'm all about breaking down silos. We're all trying to do the work.”

The community-level focus on addressing health disparities seems to be working, she says. The center is tracking data, including how many mothers come to them who are first-generation breastfeeders. “That means it’s your first time breastfeeding and you don’t know anyone else who's breastfed,” Victoria explains. It’s an important piece of information to track because under normal circumstances it would indicate that a woman might not have the support she needs to breastfeed longer than a week, let alone six months. In a fully integrated community where resources are available and needs are met, however, the situation for Black mothers who choose to breastfeed is that much less difficult.