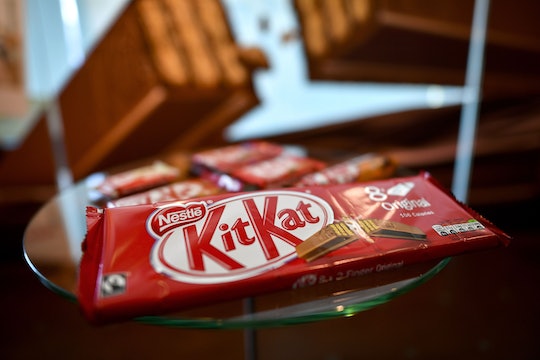 There Are Now Pumpkin Pie Kit Kats, Because Literally Nothing Is Sacred

I'm not really sure who decided that pumpkin pie flavor was the new chocolate. I was actually fine with the idea that salted caramel might become the new chocolate, but pumpkin? Says who? I'm a fan of pumpkin, of course. I line up with all of my cohorts at Starbucks for pumpkin spice lattes wearing my slouchy hat and tall riding boots. But pumpkin is simply not the same/nearly as good as chocolate, guys. For those of you who don't agree, it turns out you can buy pumpkin pie Kit Kats. In August, which is still technically a summer month the last time I checked.

Nestle's decision to release a new flavor of the already really tasty classic Kit Kat is not actually that new. The candy giant has been fiddling on the regular with the chocolate wafers, especially in Japan. Customers there can't seem to get enough of a multitude of flavors: wasabi, watermelon and salt, apple, green tea, and the one I might actually consider trying, caramel macchiato Kit Kat. The chocolate bar has 35 different varieties in all, according to Buzzfeed, and now it seems there are 36 varieties. The latest incarnation, pumpkin pie Kit Kat, has reportedly been released at several grocery stores owned by the Kroger chain.

Food bloggers are now on the hunt for the pumpkin pie Kit Kats, which seem to be pumpkin-flavored wafers filled with sweet pumpkin cream. And now I'm thinking they don't sound so bad. The food fad Instagram account Candyhunting, which tracks down all of the most recent junk food and is probably now my new favorite page, noted:

Cue the Lion King opening theme Pumpkin Pie Kit Kats have arrived! Found them at Pick 'n Save, which is owned by Kroger.

Pumpkin pie Kit Kats aren't the only fall-themed candy to be released in recent weeks: Pumpkin pie M&M's are in Target stores as we speak, as well as "Cookies and Scream" M&M's in case you prefer your pumpkin pie flavor in actual pumpkin pies or in lattes.

If the candy gods are any sort of barometer, it looks as though fall is well and truly on its way. Which is fine, really, just fine. The changing colors, the delicious comfort foods, sweaters and scarves and hot chocolate. Fall is great, as is pumpkin flavoring.

But it's not better than chocolate. Not any day of the week. Pumpkin is great for a few months of the year... chocolate is forever.