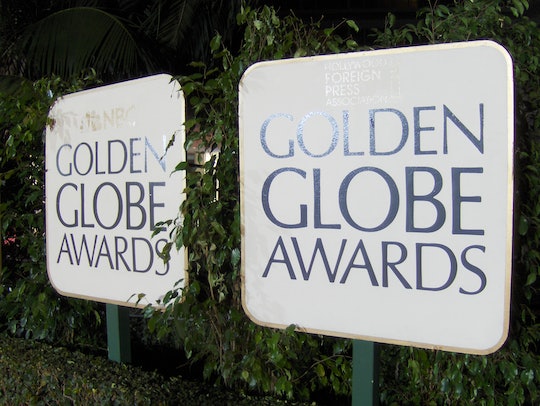 Where To Stream The 2016 Golden Globes, Because We Don't All Have Cable

It's Friday, work is nearly over, and the weekend is almost here. But before you run off for happy hour, there's one important question to address. Whether you'll be watching the Golden Globes in the comfort of your home with the good company of your pup and some popcorn — like me — or getting decked out to watch it at a friend's Golden Globes party, you'll still need to know where to stream the 2016 Golden Globes.

The event will be covered live on NBC, but if you're cable-less like me, never fear. The event will be live streamed over on NBC.com starting at 8 p.m. ET, so you can catch all the action from the comfort of your couch. (You can also tune into the official red carpet live stream over on E! Online, which starts at 6 p.m. ET.) Comedian Ricky Gervais is coming back for the fourth time to host the awards, so I'm sure we can all expect plenty of barbs aimed at the audience — he famously opened the 2010 Golden Globes with this one-liner:

Looking at all the wonderful faces here today reminds me of the great work that’s been done this year … by cosmetic surgeons.

If you couldn't already guess ... this year's show definitely holds lots of promise.

Tons of great movies, actors, directors, TV shows, and screenwriters have been nominated for this year's awards, including films such as Carol, Room, Spotlight, Joy, and Mad Max; actresses and actors like Eddie Redmayne, Alicia Vikander, Will Smith, and Jennifer Lawrence; and all the stellar TV shows we've all come to adore: American Horror Story: Hotel, Game of Thrones, Empire, Mad Men, Better Call Saul, Ray Donovan, House of Cards, Veep, and How to Get Away With Murder.

Some people are already predicting Oscar wins based off the Golden Globes nominations, but personally, I'll just be binge-watching all of the nominations to see who I'll be rooting for on Sunday.