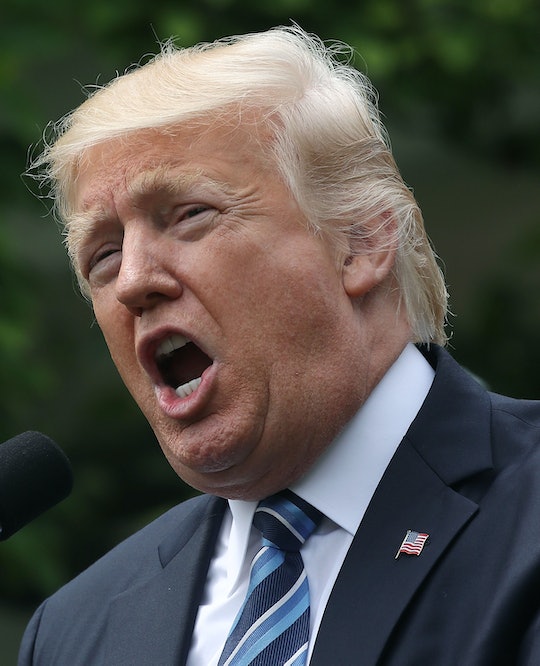 Thursday was a big day for House Republicans. After two months of struggling to push through a controversial health care bill to replace the Affordable Care Act, it looks as though they've managed to cross the first hurdle. Despite overwhelming opposition from Democrats and even within their own party, it seems the American Health Care Act has found a foothold. And the GOP was overjoyed, as was President Trump, probably on account of all the winning. Even though he was reportedly meant to be on a flight, Trump was on hand during the health care vote to celebrate its passing in the Rose Garden outside the White House.

Romper reached out to the White House for comment and is awaiting a reply.

It was a narrow victory for House Republicans, with a vote of 217-213. But a victory for the party nonetheless. After the initial attempt to pass the American Health Care Act crashed and burned in March due to a massive lack of support (particularly from the powerful conservative House Freedom Caucus), the passage of the amended bill was met with much celebration in the Rose Garden. And Trump didn't want to miss out on all of the self-congratulatory back slapping among the rest of the rich white men. He delayed his flight to New York, where he was expected to meet with Australian Prime Minister Malcolm Turnbull, according to Fortune. The two leaders were meant to discuss North Korea's missile testing, economic issues, and the Obama-era deal Turnbull had made to resettle 1,250 refugees from immigration camps in the Pacific.

Clearly, this was less important than celebrating the health care bill, and also mostly himself.

During one of two speeches Trump gave in the Rose Garden, in front of a sea of smiling (mostly male and white) Republicans, Trump told reporters that the health care debate "really brought the Republican Party together" and promised that this new plan to replace the Obamacare "catastrophe" would be a "great plan."

He failed to mention the estimated 24 million Americans who could be left without health insurance if this new bill is passed by the Senate or the MacArthur Amendment that would give insurance providers the opportunity to charge people with pre-existing conditions more money.

Instead, Trump heartily thanked Speaker of the House Paul Ryan, one of the main arbiters of the bill and a former Trump critic. Ryan took a turn saying his thank yous, then another politician, and another... all of that gratitude and celebrating seemed a little premature. This is simply the first step for the bill, and political pundits are skeptical about the likelihood that it will be passed in the Senate.

Then again, these political pundits were also skeptical that Trump would win the presidency.

Meanwhile, Prime Minister Turnbull is in New York City, checking his watch and promising himself he's only waiting on Trump for five more minutes.