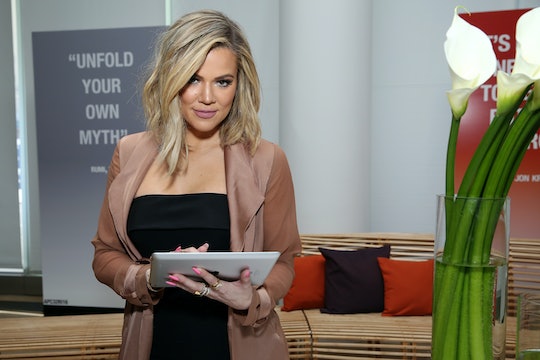 Where Will Khloé Kardashian Give Birth? She's Got A New Hometown

Now that Kim Kardashian-West has welcomed her third baby, daughter Chicago, and Kylie Jenner has announced the birth of her first daughter, baby Stormi, there's only one member of the Kardashian/Jenner family left to give birth. Fan favorite Khloé Kardashian, who is expecting her first baby with boyfriend Tristan Thompson some time in the next month. As her due date draws closer, fans are anxious to see what the Good American designer's birth plan looks like. Like where Khloé Kardashian will give birth, who she might have in the room with her, and perhaps most importantly of all... will she go ahead and eat her baby's placenta a la sister Kim?

Khloé and her NBA player boyfriend Tristan Thompson officially announced that they were expecting a baby via Instagram back in December 2017, when she shared a black-and-white photo of her pregnant belly being cradled by both her and Thompson's hands. After months of speculation about whether she was pregnant, the Revenge Body star explained to fans on Instagram why she had kept her pregnancy a secret initially, writing, "I know we've been keeping this quiet but we wanted to enjoy this between our family and close friends as long as we could privately."

Fans immediately forgave her for the secrecy, of course, not just because she's Khloé Kardashian and they pretty much just love her, but because I think people understood her need for privacy.

Now that the cat is out of the bag, as it were, Khloé is all about discussing her pregnancy with fans and on the show. On the season finale of Keeping Up With The Kardashians, Khloé revealed the gender of her baby while on the phone with youngest sister Kylie Jenner. She's expecting a baby girl, which will mean all of the youngest babies in the family are girls (brother Rob's 1-year-old daughter Dream, Kim's baby Chicago, and Jenner's little girl Stormi with boyfriend Travis Scott). Khloé seemed surprised, but excited, to find out she was expecting a daughter.

Now that fans know what she's having, the next question is where will she have the baby? Khloé splits her time between Cleveland, where Thompson plays for the NBA team the Cleveland Cavaliers, and Los Angeles. While she seems to enjoy spending more and more time at Thompson's home in Cleveland, it seemed like she might give birth in Los Angeles. First of all, Khloé reportedly had her 20-week check up at Los Angeles Cedars-Sinai Medical Center, which is also where sister Kylie gave birth to Stormi Webster on Feb. 1. But Khloé seems to be flipping the script for love; during a recent episode of KUWTK, she told Kim that she plans to have her baby in Cleveland. She said that her doctor would be flying to Cleveland to deliver the baby, in fact, to keep the first-time mom happy and comfortable.

During that same episode, Khloé also told sister Kim that, like her, she plans to eat her baby's placenta. Kim has been a longtime advocate of taking placenta pills after giving birth, and it seems Khloé plans to do the same. So I guess she's not planning on doing everything differently from the rest of her family.

A lot has changed for Khloé since she started spending more time in Cleveland to be closer to Tristan. She has been known to tell everyone who will listen how much she loves being there, how much she loves Tristan... it seems to represent a much more content chapter in her life. So it makes absolute sense for her to welcome her baby in the place where she has found her joy. Family tradition be damned.