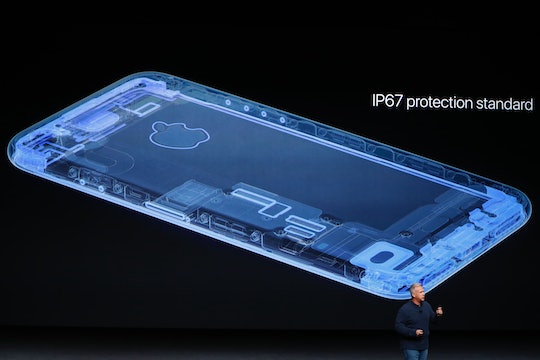 Which iPhone 7 Features Changed The Most? There Are Some Major Differences

As it has been one day each September for the past few years, all the internet buzz Thursday was rightfully about the #AppleEvent in San Francisco, during which the company announced an exciting slew of new gadgetry, including the highly anticipated newest version of its iconic iPhone. Tech buffs and Apple enthusiasts are psyched to check out the iPhone 7 when it becomes available Sept. 16, and the most dedicated will spend at least $649 to be among the first to discover its secrets firsthand and determine for themselves which iPhone 7 features truly changed the most.

The newest iPhone largely mirrors older models in aesthetic and function, but the major new additions — and, in the controversial case of the disappearing headphone jack, deletion — are generating major hype. Apple has nixed the iPhone with 16GB storage, and will now offer the option of the 32GB base model, as well as 128GB and 256GB, which is more than the iPhone 6 or iPhone 6S ever handled, according to The Verge. Also, the iPhone 7 will emerge in two brand-new color options: a high gloss jet black finish and a matte black, CNN reported, in addition to the existing gold, silver, and rose gold.

Those changes are notable, but they're not the main topics of conversation surrounding the unveiling. Theses are the features that really deviate from the bygone generation of iPhone, and the ones that are going to have people shelling out the big bucks:

It was a move that, Apple Marketing Executive Phil Schiller said, required "courage:" The ever-present headphone jack will be conspicuously absent on the the iPhone 7 and the iPhone 7 Plus. Those hip to the times will replace their now-sadly-antiquated, but much-loved, wired ones with some wireless earbuds — like the AirPods Apple will begin selling in late October for a whopping $159. Old-school holdouts (who maybe should just hang onto their Motorola RAZRs, tbh), can use the adapter included with the purchase of the new phone to keep using the wired version.

The fact that the iPhone 7 will be water-resistant (but not water-proof) is perhaps the biggest day-to-day game-changer that Apple announced Wednesday. So, while it will probably still be smart to keep a box of dry rice on-hand in case the new phone ends up completely submerged, the improved defense against errant splashes will offer significant peace of mind.

Well, it actually won't be a true button anymore at all, The Verge reported. The new and improved home "button" will be a force-sensitive static version, and it will use Apple's Taptic Engine to deliver a unique vibration for each type of alert it delivers.

Improved Camera Capability, Because Selfies (And Other Types of Pics)

Older versions of the iPhone sported just one camera. The iPhone 7 Plus has two, because this is the age of selfies and foodie Instagram. According to CNN, the two 12-megapixel cameras will be side-by-side. But one will be wide angle and the other will be telephoto, meaning that users who opt for the larger model can enjoy twice the optical zoom and ten times the digital zoom.

Apple always strives to encourage as much mystery, speculation, excitement, and longing for the next best thing around its product announcement. And this time, it has really delivered, presenting its dedicated customers with a new phone with features that really showcases Apple's spirit of innovation.