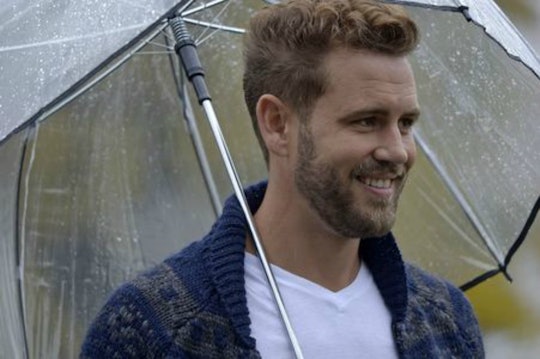 It's that time of year again, ladies and gents: we're down to the final four on The Bachelor. Last week, there were some crazy hometown dates and Andi Dorfman showed up at Nick's door. But let's not be fooled — we all know Andi is there just so she can sit on the couch and Nick can shed a solo tear about finding "love." Nick loves to talk about finding The One and ABC loves making us watch it, even though we have actual business to get down to. Like contemplating who are Nick's final two on The Bachelor? Who's he going to get rid of? Who does he propose to? And most importantly, does Nick even like olives?

We may never know about Nick's palette, but we do have a bunch of clues as to who he's going to live happily ever with. Let's all get real here for a minute, though. This season has been boring AF. If it weren't for Corinne's facial expressions or trying to figure out how Rachel can be so totally perfect and also the next Bachelorette, we would have nothing this season. Remember Danielle M.'s last date with Nick? Exactly.

There's No Way It's Rachel

There's a chance that Rachel is one of the final two, but I'm not buying it. And we know she doesn't win (hence her upcoming Bachelorette journey). It's extremely irritating that ABC decided that they would announce the Bachelorette to make things interesting mid-season, but it does make it easier to start placing bets on the final two. Plus, I am so glad she's making it out of the show without Nick. No offense to him or anything, but come on — Rachel can do better.

He Does Not Want Corrine

That's just not going to happen, since she's likely going home right after he talks to Andi. Because even though Nick is a sucker for reality-TV fame, he does seem to want to fall in love. And Corrine's hometown date showed that when it comes to Nick, she's not the person for him. Also, not only has she been texting with Chad, the beefed up bad boy from JoJo's The Bachelorette, they were out partying with each other this week (along with Olivia Caridi, from Ben Higgins' The Bachelor season). It was a pre-Oscar party!

Nick Had Actual Fun With Raven

Because Raven is low key hysterical. They sort of seem like an unlikely duo, but Nick seemed to genuinely enjoy his time with Raven and her family. Like, there were moments when he didn't look miserable. Even he said that his relationship with her was surprising him. She's definitely a solid contender.

It's Gonna Be Vanessa

I feel like Vanessa is just Nick's type. She's getting the proposal. And then they're going to fight about where to live and eventually break up (there is no way they're getting married), but it will be Vanessa. They've been lovey, dovey since the very beginning and I feel like the girl who cries the most about being afraid to lose always sort of wins at the end.

Then again, anything can happen and that's a big part of why we love this show.