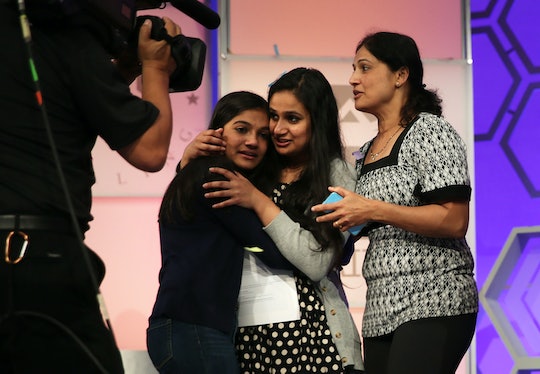 Who Are The Top 5 Scripps Contestants' Moms? They've Been Bonding

Just when you thought your kid was pretty superb for putting his own plate in the dishwasher without being reminded... along comes the Scripps National Spelling Bee. This year's amazing line up of super whiz kids has been whittled down to the top five spellers. What must it be like to have reared such little geniuses (apologies to my own geniuses, of course, you are magnificent)? And who are the top five Scripps contestants' moms? They look like they're having a great time bonding at the competition.

I'm trying to imagine what it must be like to have one of your kids in a national spelling bee. When my son was in goal during a soccer game once I thought I was going to vomit and he was only four years old. As much as I feel for the kids sweating it out under a national spotlight, I commiserate with the moms. And from the looks of things, these wise women are commiserating with each other as well. Rather than going all crazy competitive with each other, they are supporting each other. They seem to know that they're all in (essentially) the same boat, and that when you raise wee geniuses things are going to get pretty real on a national stage. They were holding hands and comforting each other... and how fantastic is that?

So who are these super moms? Well, there's the mother of Snehaa Ganesh Kanur, the 13 year old Sacramento native;s mother is winning fans on social media for reaching out to another contestant's mom while she spells.

Then there is young Sylvie Lamontagne, a second time contestant at the Scripps National Spelling Bee (she placed ninth at the 2015 Bee). While she didn't finish in the top three, she placed fourth and knows she has her mom in her corner for when she steps off the stage.

While Smrithi Upadhyayula's mother (like the rest of the Scripps Spelling Bee moms) remains a bit of a mystery, it's possible the young contestant picked up a few traits from her mom. She is an accomplished young woman who plays the flute, loves learning Indian classical music, and writes short stories. The Dallas native might have been defeated by the word theriaca, but she clearly has a bright future ahead of her.

Young New Yorker Jairam Hathwar is still in the finals, and his mother must be sweating bullets. He has spelled words I've never heard of... I hope someone's holding his mom's hand right now. She's going to need it.

Last but not least, we have the 11 year old Houston native Nihar Janga. The boy who dreams of being a neurosurgeon, loves the movie Akeelah And The Bee (how fitting, right), and presumably made his mother very proud by offering the definition of the word he was offered before the pronouncer.

When the Scripps National Spelling Bee is finally done, the cameras have all turned off, and the kids have gone to bed, I hope these moms put their feet up and enjoy a moment. When they can pat each other on the back and say, you know what? Today we shared a parenting win. Good on us.