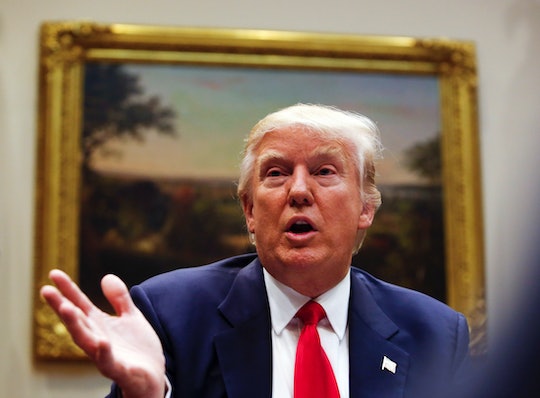 When President Trump delivers his joint address to Congress on Tuesday evening, there will be a few special guests in attendance whose names viewers may not recognize. Denisha Merriweather, a grad student pursuing her master's degree at the University of South Florida, will be one of them. Grad students don't find themselves in Congress all that often, which may leave viewers wondering: who is Denisha Merriweather, and why exactly was she invited to Trump's joint address?

The special guests who presidents invite to their addresses are usually there to underscore their policies, and Merriweather is no exception. The grad student is an advocate for school choice, the school system that Trump and his education secretary, Betsy DeVos, have both pushed for. It supports the use of charter schools and voucher programs in order to (in theory) give parents more options for their children's education. However, most studies conducted on these programs have yet to find evidence that voucher programs improve student outcomes, according to Business Insider, and critics (including teacher's unions) argue that they could strip public schools of much-needed funding, according to Forbes.

Merriweather disagrees with that notion, however, and has been sharing her story for several years now. As a Jacksonville, Florida, resident, she said school choice helped turn her life around. She grew up in an area where the median household income was half the city-wide average and more than 40 percent of residents received food stamps, and she failed the third grade not once, but twice.

"Now that I’m in graduate school, I can look up statistics that suggest I’ve beaten the odds," Merriweather wrote in an op-ed for the non-profit education news site The 74 in January. Merriweather said that Florida's school choice scholarship — the Step Up for Students tax credit — helped her change her life in the sixth grade. "There are many paths to escape the dead end into which many students like me are born," she wrote for The 74, arguing that tax-cred scholarships and the ability to attend private schools, charter schools, or public schools need to be available to low-income students.

"I don’t understand how anyone could object to giving disadvantaged kids more options so they are more likely to be successful," Merriweather wrote for TBO in 2015. "Students in poverty need all the help they can get, and all tax credit scholarships do is offer them another helping hand."

Those against school choice are unlikely to argue that point, and I doubt any could argue against Merriweather's success story — but that doesn't discredit arguments against the program, either. According to Salon, a 2009 study showed that less than one-fifth of charter schools provide better education than their public school alternatives. Critics also argue that the cut in funding to public schools disproportionately affects low-income families, who often have no other options in nearby proximity, and reduce education to standardized test performance, according to Grassroots Education Movement activist and teacher Brian Jones.

"What we’ve seen over and over again is that many of the parents [who initially pushed for school choice] will switch to our side after they experience it. They realize that school choice does not promote equality or benefit them. Not to mention, what happens when parents have no good choices available?" Jones told Salon in 2012. He went on to explain his concerns about schools competing for high grades in a race for funding and school inscription:

As school choice plays out, parents begin to see that it crushes genuine learning. For example, it reduces literature to a main idea and education to a chore [that is organized around high-stakes standardized multiple choice tests]. The real lesson is that school is not a place where you investigate your own questions, but where you learn to answer someone else’s questions the way they want you to answer them. It makes education a chore rather than a joy.

Whether Merriweather will speak on Tuesday evening or simply have her story shared by Trump is unclear — but the grad student will definitely be part of Trump and DeVos' attempt to support their school choice program in front of Congress.