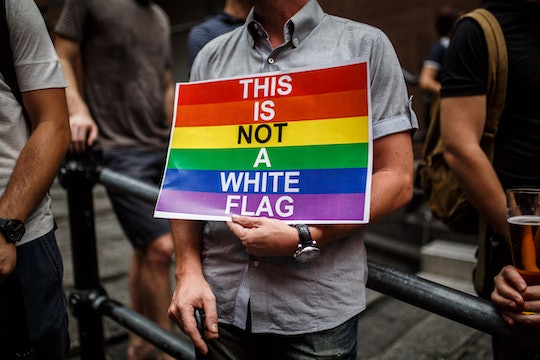 Who Is Jean Carlos Mendez Perez? He Was With His Partner When He Died In Orlando

Those who knew him described him as "dynamic" and "always happy," but who Jean Carlos Mendez Perez was in life is now immortalized by his status as one of the victims of the deadliest mass shooting the United States has ever seen. The 35-year-old was at Pulse, a gay nightclub in Orlando, when a gunman pledging allegiance to the terrorist group ISIS entered with an assault rifle and a semiautomatic handgun. The killer ultimately murdered 49 people and injured 53 others, and both Perez and his longtime partner are among the dead.

Authorities have released the names of nearly all of these who died at the hands of a man who was reportedly enraged by the sight of two men kissing in Miami a few months ago. While that kind of hate contributed, at least in part, to Perez's death, it seems that he was proudly himself in life. Perez moved from Puerto Rico to the United States during his teen years, The Orlando Sentinel reported, and, at the time of his death, was a salesperson at Perfumania who had just started wearing a Jimmy Choo scent himself. In fact, that job is how he met Luis Daniel Wilson-Leon about 10 years ago, before the two fell in love.

Perez and Wilson-Leon, 37, were at Pulse's Latin Night together when the ambush started shortly after 2 a.m. Perez, who worked out at the gym almost daily and enjoyed providing treats for the three children to whom he was "a fun-loving and doting uncle," according to the Sentinel, would not live much longer.

Kristal Zavala, a woman identifying herself as Perez's cousin, mourned his death on Facebook shortly after his tragic death:

Thank you all for your prayers. It has been confirmed that my cousin Naej Mendez was one of the victims who lost their lives in the tragic and horrible incident. Please keep praying for my family, so that the Lord gives us strength in this hard moment. ‪#‎prayfororlando‬‪#‎RIPJeanky‬ you will forever be missed. Love you always!

Perez's Facebook page contains photos of him spending time on a beach with friends and, gut-wrenchingly, features a photo of him overlaid with the French flag, a tribute to the 130 people who died in a series of coordinated terrorist attacks in Paris in November. That Perez himself died in a terrorist attack just months later really underscores the horrible, unpredictable nature of mass shootings.

Investigators are working hard to determine what exactly happened in the nightclub between the 2 a.m. ambush and 5 a.m., when officials forced entry, effectively ending the hostage situation inside and shooting the gunman dead. It's hard to find solace in any aspect of this situation, but it's worth hoping that Perez and longtime partner, Wilson-Leon, were near each other when they died, and that they felt each other's love until the very end.