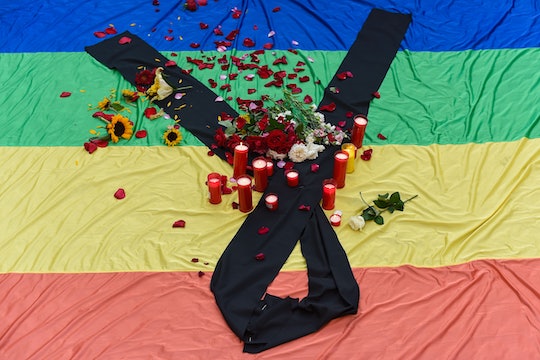 Who Is Martin Benitez Torres? The Orlando Shooting Victim Was Visiting Family In Florida

In the immediate wake of the shooting massacre at an LGBT night club in Orlando, Florida early Sunday morning, authorities estimated that the death toll of the tragic attack would be at least 20. Hours later, after the threat of active explosives was ruled out and authorities were able to enter the club, they were horrified to find that the death count was higher than initially anticipated: 49 dead, not including the gunman. Among those whose life was taken was Martin Benitez Torres, a 33-year-old Puerto Rican who was visiting family in Orlando.

According to The Orlando Sentinel, Torres lived in San Juan, Puerto Rico, and had arrived in Orlando only a few days before the shooting. He was a student at Sistema Universitario Ana G. Mendez in San Juan. The day before the attack, Torres posted photos and videos on Facebook, sharing images from his time in Orlando, updating family in San Juan about his vacation. These included a video of him cooking food with his family, and another giving a tour of the apartment complex he was staying at so that family and friends back home could see it.

Comments at Torres' final photo, posted just hours before the attack, turned from happy to tragic as friends at first joke about the photo, followed by a message asking if he's okay, and then, later, tearful emoticons as Torres' name was added to the list of victims. Torres' cousin, Sonia N. Crapps, a resident of Orlando, posted a touching note on Facebook, writing,

May you Rip Primo.. We love you.. Going to miss that big smile always happy.. So heartbroken.. He will miss him so much. He was a great person. I can't believe it that my cousin is gone to soon. He was amazing person inside & outside. I am so tired of people killing other people like our family & friends.

As the next of kin of the Orlando shooting victims were notified on Monday, the official list of the dead, posted publicly at www.cityoforlando.net/blog/victims/, continued to grow. Torres was the 17th name to be added. According to New York Magazine, 38 of the victims were found dead inside the club, 2 were found outside the club, and 9 died on the way to the hospital. As of Monday, 43 of the wounded were still hospitalized, with 5 in "grave condition," according to Orlando health officials.

On social media and at vigils across the country, the dead are remembered. The hashtags #WeAreOrlando and #PrayForOrlando accompany images of those whose lives were taken. Given that the shooting occurred at a night club, in the early morning hours, many of the victims were young; It was Latin Night at Pulse, and so many of the victims were Latino. Benjamin Di'Costa, a former dancer at Pulse nightclub, told McClatchyDC that Pulse is a "very trendy club, mostly younger, different demographics... This is one of the No. 1 destinations for LGBT people to attend in the summertime."

On Twitter, NBC journalist Mike Valerio said Orlando investigators, during their investigation of the crime scene at Pulse, had to tune out the incessant sound of cell phones ringing as concerned friends and family tried to reach the victims. Now that all but one of the 49 victims have been identified, the impossibly long waiting period is finally over, and the world and the nation joins the loved ones of the victims in their mourning.