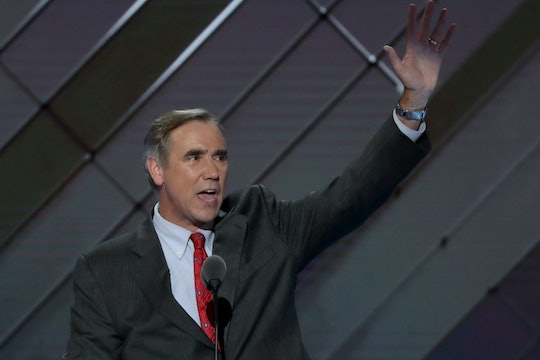 While you were sleeping, an Oregon lawmaker was talking. And talking, and talking, and talking. Those who had never heard of the man before are now wondering, who is Sen. Jeff Merkley, whose 15-hour speech kept the Senate up all night? Right now, he's Supreme Court nominee Neil Gorsuch's biggest problem, but that could end on Thursday, because Merkley's speech wasn't technically a filibuster, according to the Washington Post. While nothing can stop a filibuster, Senate Majority Leader Mitch McConnell moved to end the debate on Tuesday, and his motion will be up for a vote on Thursday. At that point, Republicans are expected to invoke cloture, also known as the "nuclear option," allowing a simple majority vote on Gorsuch.

Although Merkley's speech was largely ceremonial, it did highlight just how strongly he and other Democrats oppose Gorsuch's nomination. Merkley has long been a proponent of the talking filibuster, and in addition to speaking about his misgivings with Gorsuch, he also called attention to the fallacy of the Republican argument against the nomination of former President Barack Obama's Supreme Court nominee, Merrick Garland. Republicans argued that the position shouldn't be filled in an election year, but according to the Post, one-third of U.S. presidents have appointed Supreme Court justices during election years, including President Donald Trump's hero, Andrew Jackson.

Trump must admire Merkley's stamina, a quality that's very important to him in a leader. But standing and talking might be the easiest 15-and-a-half hours Merkely's ever had; in 2012, he spent the same amount of time completing an Iron-distance triathlon, which entailed 2.4 miles of swimming, 112 miles of biking, and 26.2 miles of running (yes, a full marathon after all that). Compared to that, simply clocking in an extra-long shift at work must have felt like child's play.

On the issues, Merkley supports many of the talking points that got Trump elected. The senator is proud of his working class roots, and champions "honest work" and "strong families," restoring jobs, supporting small businesses, and ending U.S. dependence on foreign oil. He's spoken out against the Trans-Pacific Partnership and NAFTA, and he's more into buying American than the president. But don't call him a moderate just yet; he's also passionate about protecting consumers from banks, fighting climate change, making college more affordable, women's rights, and LGBTQ equality.

Merkley's past work includes amending the Affordable Care Act to include a guarantee that working moms receive ample breaks and a clean, private space to breastfeed or pump at work. When McConnell famously silenced Massachusetts Sen. Elizabeth Warren during a debate on Attorney General Jeff Sessions in February, it was Merkley who later spoke for Warren, reading a portion of a letter by Coretta Scott King that criticized Sessions. Just like Warren did before him, on Tuesday night, Merkley persisted.