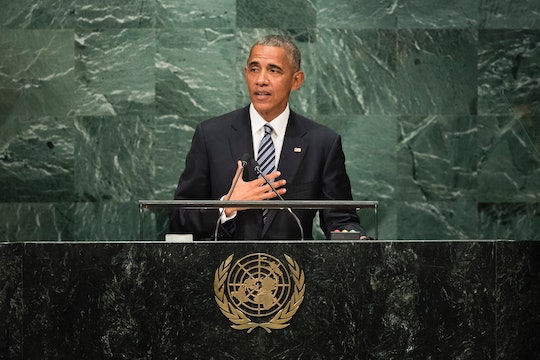 Who Is The Little Boy That Asked President Obama About Adopting Omran Daqneesh?

The world's heart broke for "The Boy in the Ambulance" in August, the 5-year-old Syrian child photographed after surviving an airstrike in Aleppo. Covered in ash and blood, Omran Daqneesh unknowingly became the face of the devastation taking place in Syria. But as luck would have it, despite further trauma and tragedy (Omran's brother died shortly after the photo began making the media rounds), the photo of Omran struck a cord with a little boy from almost 6,000 miles away in New York. In a moment that would later snowball into an adorably heart-wrenching viral trend, 6-year-old Alex wrote a letter to President Barack Obama asking if his family could adopt Omran Daqneesh.

“Dear President Obama, remember the boy who was picked up by the ambulance in Syria?” Alex wrote. “Can you please go get him and bring him to our home? We’ll be waiting for you guys with flags, flowers and balloons.” The President was so moved by Alex's compassion, offering to share his toys and teach Daqneesh how to ride a bike, that Obama read his letter at the Leaders' Summit on the Global Refugee Crisis hosted at the United Nations.

Alex and his new friend, the president of the United States, teamed up again later, releasing a video of Alex reading the letter from his dining room table. Obama posted the video on his Facebook account, accompanied by his words from the Leaders' Summit, reading:

Those are the words of a 6-year-old boy — a young child who has not learned to be cynical or suspicious or fearful of other people because of where they come from, how they look, or how they pray. We should all be more like Alex. Imagine what the world would look like if we were. Imagine the suffering we could ease and the lives we could save.

President Obama followed through on these words when he announced that more than 50 countries had agreed to donate $4.5 billion to groups "helping refugees find work and education," according to The Huffington Post. The United States will contribute $1 billion.

The Huffington Post reports that 65 million people are currently "displaced from their homes due to violence and persecution." Twenty million of these people are refugees spread out over just 10 countries. Despite insensitive tweets from those like Donald Trump Jr., comparing them to candy, it's important to remember that refugees like Omran are real people suffering real pain.

Because if a 6-year-old boy can understand the value of kindness and selflessness, the rest of the world should certainly be able to as well.