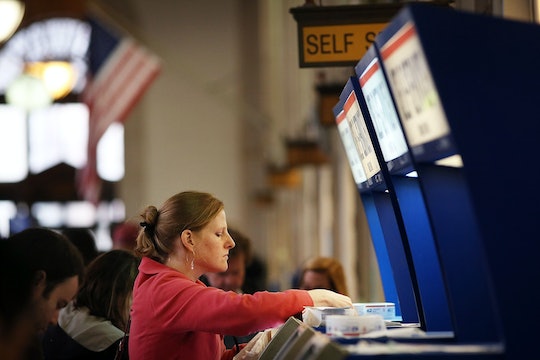 Why Are Millennial Moms So Worried About Taxes? They Have Less Money To Go Around

Filing taxes is a task nobody enjoys — but according to a NerdWallet survey, it's a chore millennials fear more than any other generation. That's a concern that was echoed a recent Romper poll, which found that 27 percent of 584 millennial moms surveyed ranked taxes as the most important election issue this year. Considering that taxes help pay for essential services, including child benefit programs and low-income assistance, why are millennial moms so worried about taxes?

It likely comes down to the fact that millennials just don't have that much money to spare for taxes. According to the NerdWallet survey, which was conducted in February, the 80 percent of millennials worried about taxes are mainly concerned about three things that could go wrong: They're scared of making a mistake while filing taxes, not getting the largest refund possible, or overpaying on taxes. In other words, millennials are more afraid than their older counterparts of losing their hard-earned money — and considering the uniquely challenging financial outlook millennials face, that's shouldn't be too surprising. (Especially once you consider the cost of bringing up a child or two.)

Romper's survey as well proved that the idea of millennial moms being concerned about taxes is very real. According to the poll, which was conducted by polling service SurveyMonkey and posed questions to pregnant women and mothers nationwide, the majority of those surveyed — some 27 percent — said that lowering tax rates was most important to them, ahead of issues like national security. The majority of women surveyed also listed their annual household income at less than $75,000.

Compared to both Gen X and the baby boomers, it seems millennials' money situation is simply more dire. Taxpayers in the 18- to 34-year-old age group are typically saddled with more debt and earn less income than either their parents or their grandparents did. According to CNBC, one in five millennials are also taking on the expenses of supporting an aging parent, which costs an average of $18,250 extra a year.

“We’ve now had five years of a very difficult economy, and young adults have been hit hardest of all,” Paul Taylor, executive VP of the Pew Research Center, told The Financial Post in 2012. “It’s having a major ripple effect in how they’re living their lives. All the classic milestones of adulthood — getting married, having kids, settling down and buying a home — are happening much later.”

This is all on top of skyrocketing student loan debt, stagnant wage growth, and a small job market. Millennials might be earning university degrees at rates higher than their precursors, but it means entry-level job requirements have increased, leaving newly employed millennials both underpaid and still struggling with the debt of their Master’s degrees.

Mothers and fathers have it even harder, unfortunately (which is often why we see millennials pushing off parenthood until their later years). According to the United States Department of Agriculture, raising a child costs approximately $245,340 — and that’s without taking higher education into account. Child care, medical bills, housing, and schooling are all pricey, and millennials only just began having kids in earnest in 2014, which means they’re juggling the new, added costs of kids to the other financial woes millennials face.

Adding childrearing costs to a struggling economy and high amounts of debt means millennial moms are facing a pretty worrisome financial situation. So the fact that they’re a little scared of tax time is no surprise — and they’ve got plenty of incentives to make sure they don’t mess their tax filing up.