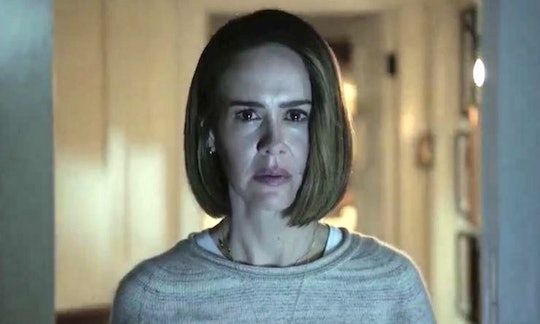 'AHS: Cult' Is Delivering An Extra Twist To Fans This Season

For the first time in a while (or, possibly, ever?) AHS: Cult is set to be grounded in reality as much as possible, making it more psychologically scary for viewers, but the trailers make it seem just as terrifying (if not more so), than previous seasons. There is another difference this season though, and that’s the night it’s on each week. Instead of the usual Wednesday time slot, the series is going to be on Tuesday nights instead, which will no doubt have fans asking: why is AHS: Cult airing on a different night? Interestingly enough, as far as the past six seasons go, this will also be the earliest premiere date yet.

I mean, sure, AHS: Roanoke premiered in September 2016, but even then, it was Sept. 14 and all of the preceding seasons premiered in the month of October. So that in and of itself is something for fans to get used to, let alone the fact that it's going to be debuting on an entirely different night. Over the past six seasons, fans have gotten used to Wednesday being the typical night for new episodes of AHS each week, and while the show isn’t likely to be hurting from the switch, it’s definitely something fans will have to get used to for Season 7.

But why is AHS: Cult airing on a different night this time around? It’s not clear if this will be the new night going forward, but it might have something to do with the theme for AHS Season 7.

One possible reason for AHS: Cult airing on Tuesday nights this season could be that the 2016 election — which plays a role in the Season 7 story — took place on a Tuesday night. In a way, that’s a huge change for FX to agree to, but then again, AHS has been a staple of the network for years, so it wouldn’t be totally out of the realm of possibilities for AHS: Cult airing on a different night. And if you're going to base the premise of the story on the election, what better way to do that than make it air during the same day of the week as that fateful night?

Another reason might just have to do with timing, though. Right now, the weekly lineup for FX has Snowfall’s season finale airing on Wednesday, Sept. 6 at 10 p.m. ET, followed by the Season 4 premiere of You’re the Worst. It could be that AHS: Cult just didn’t fit in with its usual time slot and that FX executives trust in the show’s following enough to move it to another day of the week with no repercussions in terms of viewership. And really, they probably won’t be losing any fans because of a new air date.

But personally, I hope the reason is tied to the election. It would just be so fitting and something Murphy would totally do.