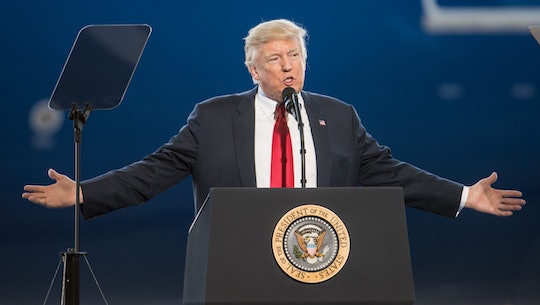 About Trump & The RNC's Media Survey

President Donald Trump has made it pretty clear how he feels about the media, but now he wants to know how Americans feel about it — again. Those who have been following the businessman-turned-politician's antics since his days on the campaign trail may have raised an eyebrow at Trump's latest media accountability questionnaire, since it looked pretty similar to his last survey, which was released in August last year. So why is the RNC using Trump's media survey again — and perhaps more importantly why now?

First of all, the survey has changed, at least a bit. The first time the "media accountability survey" was released by Trump's campaign in August, it focused more on Democratic candidate Hillary Clinton, while she went unmentioned in February's survey. However, both surveys used language that slanted towards Trump's widely-stated opinions, with questions like, "Do you believe that contrary to what the media says, raising taxes does not create jobs?" and "Do you believe that the media wrongly attributes gun violence to Second Amendment rights?"

Trump has repeatedly made it clear how he feels about the media — and now, more than ever, he's taken a strong stance against many news outlets. At his rally Saturday in Melbourne, Florida, Trump opened by saying, "I also want to speak to you without the filter of the fake news." The rest of his speech — similar to many of Trump's recent talks — railed against the "dishonest media" and their spreading of "fake news."

Trump's aversion to media coverage of his presidency is understandable: throughout his brief four weeks in office, many headlines have underscored the damage his recent executive orders have caused Americans, and now that Trump actually sits in the White House, media scrutiny of his decisions has understandably doubled. Considering that Trump has been tweeting on a nearly daily basis about the "fake news media," it should come as no surprise that he would re-use his media accountability survey as another way to air his media grievances.

"Look at the language ‘our message,’ ‘our party,’ ‘our movement,’" Kathy Frankovic, a polling expert at YouGov, told Vox. "It's not a poll but a political message. The assumption clearly is that people who answer the questions will agree with the assumptions and give the ‘right’ answers."

There are more reasons to push out a survey than simply to echo Trump's political message, however. As NPR's Danielle Kurtzleben writes:

Those biased questions can plant ideas in people's heads. If Jane Doe happens to be a Trump supporter and a Christian, she might not think that she's being particularly hurt by news organizations — until she sees a question like, "Do you believe that people of faith have been unfairly characterized by the media?"

According to NPR, the survey could also work a way for Trump's team to collect numbers that align with the president's version of events and as a way to scope out the areas in which his supporters agree with him most.

It's unclear what, exactly, the Trump campaign plans to do with the survey results the second time around, but the survey makes one thing clear — Trump's campaign against the media is far from over.