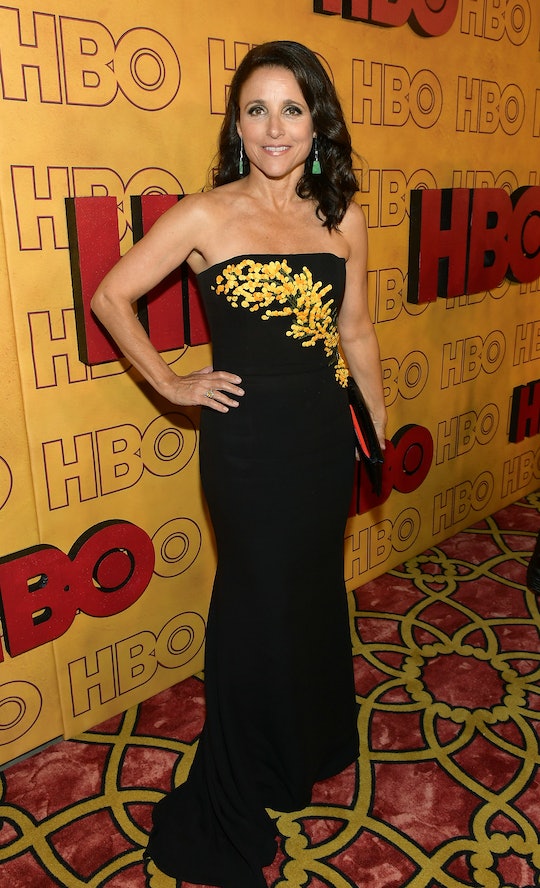 HBO's Veep did well at the 2018 Screen Actor's Guild Awards, with Julia Louis Dreyfus taking home the award for Outstanding Performance by a Female Actor in a Comedy Series and the entire cast scoring the actor for Outstanding Performance by an Ensemble in a Comedy Series. But the leading lady was nowhere to be found when the winners were announced. So why isn't Julia Louis Dreyfus at the SAG Awards?

When Dreyfus won for for her performance as Selina Meyers, the award was accepted on her behalf by presenters Connie Britton and Mandy Moore. Britton didn't provide an explanation for Dreyfus' absence, only saying that she couldn't be there but that they were thinking of her and they loved her. However, her Veep co-star Matt Walsh (who plays Mike McLintock) attempted to offer something a little more concrete — he just didn't get it quite right. He said that Dreyfus wasn't present because she was in New York doing a play, but was quickly corrected that that was actually the reason Anna Chlumsky wasn't there. His numerous flubs were a bit intended to play off Walsh's role in the show, because Mike was the former White House Press Secretary.

It seems that Dreyfus wasn't there because she's still recovering from her recent breast cancer diagnosis, though this is not officially confirmed. Dreyfus appears to be doing well, but she still seems to be taking a little bit of a (very deserved) break.

On the SAG Awards red carpet, Dreyfus' co-star Tony Hale assured People that she is "really doing great," even though she wasn't able to make it to the ceremony. A week ago, Dreyfus celebrated her last session of chemo with a video made by her sons that she posted to Instagram, where she's been actively supporting the 2018 Women's March over the last few days. While she may have had to take it easy for a little while so that she could stay healthy, it looks like Dreyfus will be back in action in no time.

Filming for Veep was also postponed while Dreyfus recovered, though it's set to resume production in August of this year. Its final season is scheduled to air in 2019. Frank Rich, an executive producer on Veep, gave an update about the situation on the SiriusXM show Press Pool in November, as reported by People.

"Julia is undergoing treatment for breast cancer, and we're obviously postponing production of the show — we were supposed to have started now — while she's in treatment," Rich said. "But the expectation is that we will shoot again. We have one more season we're doing, which we're incredibly excited about. Rather impressively, while we wait for her to gather her full strength, around her treatment, we've been having with the cast in Los Angeles, table reads of scripts for the final season as they're ready."

Walsh praised Dreyfus to Entertainment Weekly, calling her a "tremendous person" and explaining that she was recuperating well. "I would hide if I had an illness like that, but she's very brave and also better for it because she's helped other women and other women have supported her," he said. "It's a really unique, brave thing she's doing just by being so out there with it."

This wasn't Dreyfus' first victory at the SAG Awards, either. This was her ninth win at the ceremony (her fourth for Veep specifically; her other successes came from her work on Seinfeld) out of a staggering 21 nominations. Dreyfus' presence was definitely missed at the awards show, but she's sure to be back when it comes time for Veep's final season to get the accolades it will likely deserve.