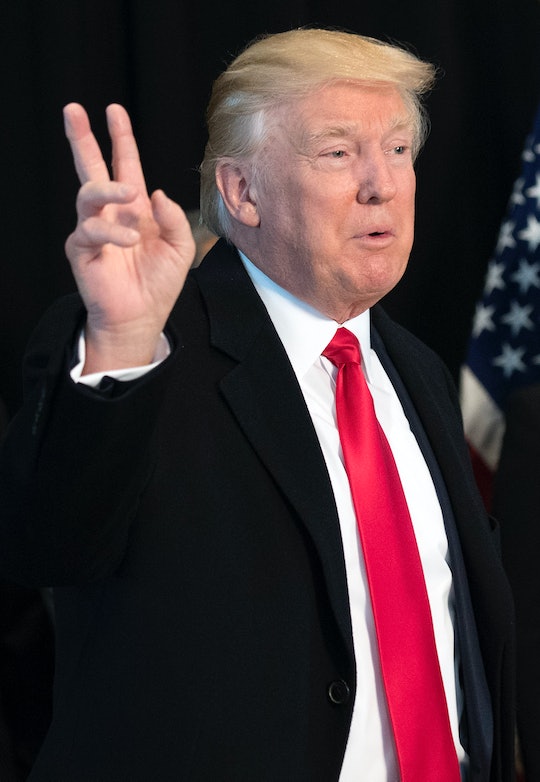 According to the Jewish Community Center (JCC) Association of North America, there have been over 60 attacks, instances of harassment, and bomb threats on 54 Jewish centers nationwide since January. That's a shocking amount of hate for such a small period of time, which is why many Americans have been waiting for President Trump to make a statement denouncing them. He did, in a way, on Tuesday, but many Jewish leaders weren't satisfied. And really, if you think about it, organizations like the Anne Frank Center being dissatisfied with Trump's anti-semitism remarks sort of have a point. It's a textbook case of "too little, way too late."

In a statement Tuesday, after touring the National Museum of African American Museum and Culture, Trump said that the visit "was a meaningful reminder of why we have to fight bigotry, intolerance and hatred in all of its very ugly forms."

"The anti-Semitic threats targeting our Jewish community and community centers are horrible and are painful and a very sad reminder of the work that still must be done to root out hate and prejudice and evil," he said. He added that anti-semitism is "horrible" and, in true Trump fashion, that "it's going to stop and it has to stop." He also said that he denounces anti-Semitism "whenever he can."

That just isn't true, since he hadn't said anything of weight until Tuesday. Even if most of those words are technically true, strung together by Trump, they sound a little empty.

Trump not only ran on policies steeped in racism, he was also endorsed by communities and voters that are known for racist and anti-semitic beliefs. His top advisor, Steve Bannon, reportedly said anti-Semitic things in the past and once ran Breitbart News, which some believe has an anti-Semitic bias. Since the election, there have been reported rises in hate crimes overall. And Trump, who as president is theoretically supposed to unite the country, has largely remained silent — only popping in occasionally, after massive outcry — which means he either unwittingly or knowingly endorses those actions or just wants it all to go away.

Saying that "much has to be done" and that it is "going to stop," without offering a plan to do so, or directly denouncing the segment of his voter base that perpetuates it, is sort of a cop out. The Anne Frank Center agreed. A spokesperson on Tuesday wrote that his remarks are like a "Band-Aid on the cancer of anti-Semitism that has affected his own administration" and a "pathetic asterisk of condescension" after all the weeks and months that he and his administration has remained silent about the attacks.

Press Secretary Sean Spicer said Tuesday that he wished the Center had lauded Trump for his remarks, missing the point. After such a long silence, which even included Trump not mentioning Jews on Holocaust Remembrance Day, a late-statement is just not enough.

It's odd that Trump doesn't understand how dangerous and awful his silence has been for Jews (and other marginalized groups targeted by white supremacists and neo-Nazis) given that his son-in-law and adviser Jared Kushner is an Orthodox Jew himself. Not that this has to mean anything, really, but just because Trump believes that his eldest daughter's family is safe from hate crimes and theft, doesn't mean that Jews across the country are.

Trump staying silent just so that he doesn't alienate a large portion of his voting base is a dangerous gamble — his silence and then generalized statements on "stopping" hate crimes puts Jews — who are his fellow Americans — at risk. In light of everything, they're right to ask for more from their president.