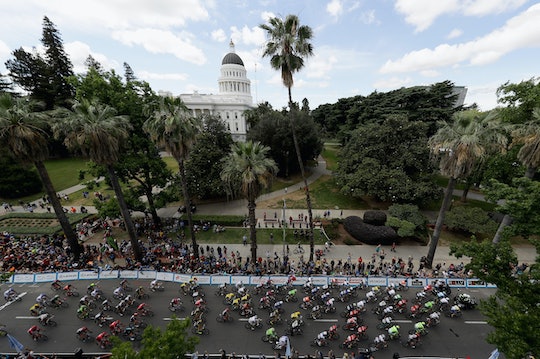 Why The Sacramento Rally Stabbings Are So Concerning

Shortly after noon on Sunday, at least seven people were stabbed outside of the California state Capitol building when right-wing extremist groups met counter-protestors during their rally, according to CBS. The Traditionalist Worker Party came together with the Golden State Skinheads in front of the Capitol building to "protest against globalization and in defense of the right to free expression" and "to make a statement about the precarious situation our race is in." When counter-protestors showed up, a clash ensued. The violence should be worrisome enough on its own, but there's another reason why the Sacramento stabbings are so concerning.

According to the San Francisco Bay Area Independent Media Center, the Sacramento rally was one of the largest nationalist rallies seen on the West Coast in a while, and members of the Golden State Skinheads, Blood & Honor, National Socialist Movement, and Ku Klux Klan were expected to attend. The Traditionalist Worker Party posted their intentions on their website prior to the event, writing:

After witnessing the brutal assaults these cowards, drug addicts, illegal immigrants and criminals committed in orchestrated pogroms by Zionist agitated colored people against elderly people, women, children, and even the disabled at Donald Trump events throughout the Golden State, we concluded that it was time to use this rally to make a statement about the precarious situation our race is in. ... We will march out numbered. But this time the cowards will have to contest with adult men who love their people, and this love makes them ferocious.

The idea that this group of people was inspired to protest globalization and the "siege from the lumpen-proletarian of third world rapists and murderers being foisted into their communities and public schools" after witnessing Donald Trump rallies is concerning. The fact that the Traditionalist Worker Party's chairman, Matthew Heimbach, has shown support for Donald Trump is very worrying, especially considering that other white nationalists have shown equal support for the Republican frontrunner.

"This is the first time since Buchanan in the ’90s and George Wallace in ’68 where you have a guy outside the mainstream speaking to white interests," Heimbach told The Washington Post. "Donald Trump, whether he meant to or not, has opened this floodgate that I don’t think can be restrained regardless of what happens in the 2016 elections."

And while Trump has disavowed supremacist groups, they're still flocking to him. According to The Wall Street Journal, white nationalist groups have claimed that traffic to their websites has increased since Trump's rise. While they may not be his intended audience, Trump's rhetoric — calling Mexicans "rapists" and "drug dealers," seemingly endorsing violence against protestors at rallies, and re-tweeting false, racially loaded murder statistics — does appeal to them.

When someone like Trump, with many supporters and a massive platform, garners as much support from the public as he has (all while supporting anti-immigration policies, a Muslim database, and deportation), it gives white nationalists the confidence to come out of the woodwork. And that is scary. The fact that white nationalists feel like the Republican frontrunner's platform is theirs to share and defend should be concerning. Because as long as mainstream politics continue to display xenophobia and racism, I'm afraid the Sacramento stabbings are only the start of something far worse.