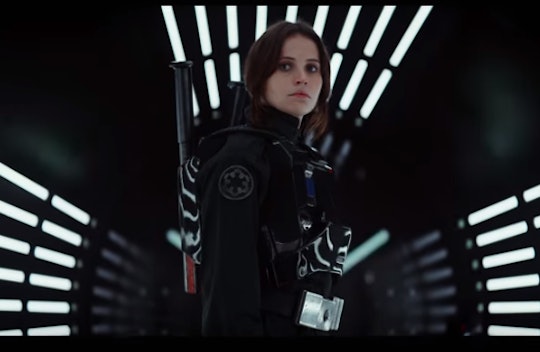 Why The 'Star Wars: Rogue One’ Reshoots Aren’t That Big Of A Deal

The much-anticipated prequel in the Star Wars franchise, Star Wars: Rogue One, has hit some roadblocks that could mean extensive reshoots, PageSix reported this week. The news has sent some fans into a panic online as questions over whether Rogue One will make its Dec. 16 release date took over Twitter on Tuesday. But according to some industry experts, fans should just calm down and breathe a little. The Rogue One reshoots aren’t that big a deal, say some film critics, and will probably mean an even better film come the holidays.

To say that fans have been in a fever to see the latest movie in the Star Wars franchise would be an understatement. After the first official Rogue One trailer went up online last April, it garnered more than 37 million views, according to YouTube, and fueled speculation over everything from the meaning of the new dark stormtrooper uniforms to theories about Jyn Erso and Rey’s shared lineage. Later, rumors swirled that the movie — set in the 20 or so years between Revenge of the Sith and the 1977 film now referred to as A New Hope — could feature cameos with Darth Vader or a younger Han Solo.

But according to an exclusive report by PageSix, Disney film execs weren’t entirely pleased with the first cut of the new film. According to that report, director Gareth Edwards had delivered a version of the film that reflected little studio input. But PageSix reported that the film tested poorly with fans, which led the studio to request a litany of potentially expensive reshoots to take place this July. In a statement posted on PageSix, a Disney rep said that the quality of the film was their biggest concern:

The filmmaking team and the studio always anticipated additional shooting and second unit work to make the film the absolute best it can be, and the actors were aware there would be additional shooting. Coming off The Force Awakens, there’s an incredibly high bar for this movie and we have a responsibility to the franchise and to the fans to deliver the best possible movie we can.

The Page Six report didn't say which aspects of the film tested poorly among fans, or whether the reshoots would mean a later release date for Rogue One. But there still may be little cause for concern. GamesRadar film critic Amon Warmann wrote recently that, when it comes to blockbuster movies at least, reshoots really aren’t that uncommon.

“There are always big and small changes that take place on a film of this size from the beginning of production all the way up to the final edit,” Warmann wrote. “I'm still confident Gareth Edwards and co[mpany] will deliver the goods.”

In other words: calm down, Star Wars fans.

Star Wars: Rogue One, starring Felicity Jones, Mads Mikkelsen, Ben Mendelsohn, Forest Whitaker, Diego Luna and Alden Ehrenreich (newly cast as a young Han Solo), is still slated to hit theaters on Dec. 16. So until that point, fans should relax, sit back, and enjoy the ride.