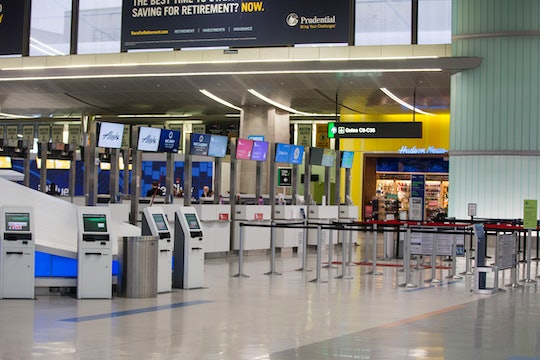 President Trump's travel ban might have been effectively suspended, but some people are reportedly still struggling to come into the country regardless. Even the son of one of the world's most legendary boxers. Muhammad Ali Jr. was reportedly detained at the Fort Lauderdale-Hollywood International Airport airport earlier this month, when he and his mother were attempting to come home after being in Jamaica. The reason? According to family lawyer Chris Mancini, it was allegedly because he was Muslim.

Ali Jr., who is the son of famed boxer Muhammed Ali, was at the Florida airport with his mother, Khalilah Camacho-Ali, Muhammed Ali's second wife. The two had been in Jamaica for a Black History Month speaking engagement held in Montego Bay. Ali Jr. was born in Philadelphia in 1972, and holds a U.S. passport. But that didn't stop immigration authorities from allegedly pulling both him and his mother aside to question them, according to Mancini. Mancini alleged that the two were pulled aside because of their Arabic-sounding names. While Camacho-Ali was released after she produced a picture of herself with boxer Muhammad Ali, her son was not so lucky. According to Mancini's account, Ali Jr. was allegedly asked if he was Muslim, and when he admitted he was, authorities continued to question him for two hours.

A spokesperson for U.S. Customs and Border Protections offered only this statement regarding Ali Jr.'s detainment and subsequent release, according to USA Today:

Due to the restrictions of the Privacy Act, U.S. Customs and Border Protection cannot discuss individual travelers; however, all international travelers arriving in the U.S. are subject to CBP inspection.

Ali family lawyer Mancini pointed out that both Ali Jr. and Camacho-Ali are extensive travelers, having visited countries all over the globe, and this is the first time either of them has been detained by CBP.

To the Ali family, it's crystal clear that this is directly linked to Mr Trump's efforts to ban Muslims from the United States.

Muhammed Ali Jr.'s claim comes hot on the heels of Mem Fox's story, a celebrated Australian children's book writer who was also detained by CBP in Los Angeles for two hours earlier this month. Fox, who has traveled without incident to the United States 116 times in the past, was questioned on the validity of her visa by immigration officers she later described as appearing to have "turbocharged powers."

I have never in my life been spoken to with such insolence, treated with such disdain, with so many insults and with so much gratuitous impoliteness. The entire interview took place with me standing, with my back to a room full of people in total public hearing and view - disgraceful.

The author went on to say she was so traumatized by the event that when she "got to [her] hotel room, [she] completely collapsed and sobbed like a baby." "And I'm 70 years old," she added.

Fox went on to receive a written letter of apology from the U.S. Embassy in Australia, but admitted she probably won't visit the country again. Whether or not Muhammed Ali Jr. will receive an apology for his alleged incident remains to be seen.