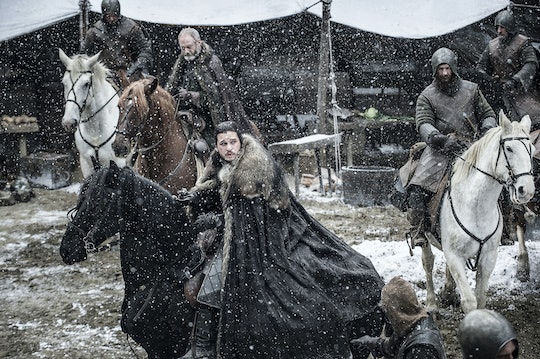 Right now, there are three different Starks out on the road. Well, two Starks and a Snow/Targaryen, but he doesn’t really know that yet. With Bran on his way from Castle Black to Winterfell, he’s not going to be meeting up with them anytime soon, but will Arya find Jon on Game of Thrones? Since they’re both likely traveling through the same roads but in opposite directions, you would assume that they might meet up at some point.

The only kicker is that in the preview for Episode 3, we can clearly see Jon at Dragonstone and Arya is nowhere to be seen. If he did come upon her traveling alone, there’s no way he would let her continue on by herself. And then there’s the little matter of how quickly things have been moving in Season 7 so far, which could be because things are happening at slightly different times. As in, Samwell sent a raven to Jon at Winterfell and he received it one episode later, but that doesn’t mean it was just one day or week later on the show.

We saw Arya stop for food at the Inn at the Crossroads in the same episode that we saw Jon set out for Dragonstone. They could cross paths, or Arya could be heading home a week before Jon left, making them just miss each other, even if the map of Westeros would make it seem like they could pass right by each other.

It also wouldn’t allow for Arya to make it to Winterfell in time to team up with Sansa before Littlefinger can get his hands on her, literally and figuratively. Granted, Sansa’s grown up considerably and has become a little wiser to his ways, but with Arya’s skills as a trained killer and Sansa’s political prowess, they can definitely hold down the fort together.

Game of Thrones has been teasing a Stark reunion for literal seasons, from Arya and The Hound arriving at The Eyrie without knowing that Sansa was right there, to getting to the Red Wedding almost as it was happening. Now might not be the time for Arya and Jon to meet on Game of Thrones, but it is the time for three of the Stark siblings to be together at Winterfell.

So if Jon and Arya manage to just miss each other on their respective travels south and north in Westeros, the least Game of Thrones can do is hook fans up with a Stark reunion of epic proportions in the form of Arya, Sansa, and Bran. There must always be a Stark in Winterfell, right? So how about three of them?