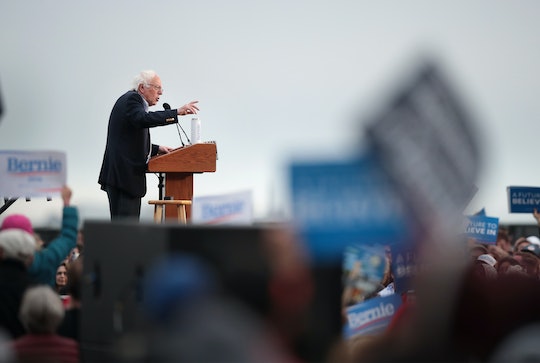 Will Bernie Sanders Support Hillary Clinton As The Democratic Nominee?

Last night the Associated Press and NBC news made an historic call: former Secretary of State Hillary Clinton locked up enough delegates to become the Democratic presidential nominee, finally shattering that glass ceiling she left so many cracks in when she was defeated almost exactly 8 years ago by then-Illinois Sen. Barack Obama. But what about Vermont Sen. Bernie Sanders? He's still vowing to fight on and refuses to concede the race. Will Sanders support Hillary Clinton as the Democratic nominee? It's hard to imagine him working to elect Donald Trump.

The Sanders campaign is salty. It has fought long and hard and filled stadiums and raised record-breaking millions of dollars with a message of social and economic justice. For months, Sanders has been a force pulling both Clinton and the Democratic party to the left, toward a progressive agenda of single-payer healthcare and free college tuition for students of state colleges and universities. It's been a wild and wildly successful campaign, and it's easy to understand why admitting defeat is tough for any candidate who's worked so hard for so long.

But math is math and there's no denying that, while Clinton will have to wait for the convention in July to make it official, she's got the delegates to be the "presumptive" nominee. The Sanders campaign took issue with the call in a statement released just after the announcement:

Secretary Clinton does not have and will not have the requisite number of pledged delegates to secure the nomination. She will be dependent on superdelegates who do not vote until July 25 and who can change their minds between now and then. They include more than 400 superdelegates who endorsed Secretary Clinton 10 months before the first caucuses and primaries and long before any other candidate was in the race.

Our job from now until the convention is to convince those superdelegates that Bernie is by far the strongest candidate against Donald Trump.

It's not going to be easy for Sanders or his supporters to turn around and throw themselves behind Clinton, who has been painted by the Sanders campaign as a cartoon of the establishment and the type of politician who practically lives deep in the pockets of the special interests lobbyists. It's hard to compete so hard and passionately against someone and lose, but it's harder still to have to then turn around and help them win again in the general election.

But Jane Sanders, Sanders' wife and one of his most important surrogates, said in interviews that she and Bernie will vote for Clinton "if they have to" and added that she hopes the Sanders' supporters will ultimately join them.

Because, even if Clinton is a bit to the right of Sanders, politically, she's much closer to Sanders' way of thinking than Trump will ever be. But Clinton needs Sanders and his voters if she's going to win in November.

According to polls, 61 percent of people who voted for Sanders have an "unfavorable view" of Clinton, FiveThirtyEight reported. She needs to woo those voters over to her side before the general election and she can't do that without help from Sanders himself.

But that will likely just take time. It's been a long, brutal primary season, but once Sanders has a chance to rest and catch his breath, you can probably bet he'll be hitting the stump for Clinton once the nomination is decided — if for no other reason than the terrifying prospect of a President Donald Trump.