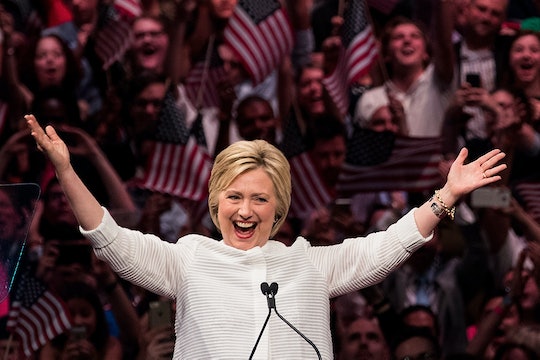 Will Hillary Clinton's Superdelegates Change Their Minds? Bernie Sanders Is Counting On It

After the Associated Press' announcement that former Secretary of State Hillary Clinton had enough superdelegates and pledged delegates to win the nomination on Monday, Vermont Sen. Bernie Sanders and his supporters stepped up to make sure no one forgot one thing: Hillary Clinton's superdelegates can change their minds before and during the convention. The only question now is if they will or not. It's a big and important question going into the convention this July in Philadelphia — especially because it is Sanders' only hope right now.

"Secretary Clinton does not have and will not have the requisite number of pledged delegates to secure the nomination," the candidate posted in a statement to his website on Monday night. "She will be dependent on superdelegates who do not vote until July 25 and who can change their minds between now and then."

He added, almost as a warning, "They include more than 400 superdelegates who endorsed Secretary Clinton 10 months before the first caucuses and primaries and long before any other candidate was in the race." Which was a nice way of saying, some of them may have been "confirmed" Clinton delegates before they got to see what kind of campaign he was running, but that's actually not the case. The delegate math is pretty straightforward.

Hillary Clinton has held out for superdelegates, too. In fact, she was in a very similar situation to Sanders in 2008 when she was behind in the delegate math. But she made public statements where she implied that the race wasn't over until you get to the convention. That might be why you don't see her totally pressuring Bernie to pull out of the race just yet. That's the thing about superdelegates: they're wild cards. And if something happens between now and the convention that puts them off of Clinton, they could theoretically go Sanders. But he would need about 500 superdelegates to change their minds. In 2008, only about 30 of them changed their affiliation from Clinton to President Obama.

However, as of right now, Sanders doesn't seem to be backing down and he's not totally doing it in the most graceful of ways. Sure, he has a point, technically, about delegates being able to change their minds. But Hillary is also winning the popular vote. The more Sanders talks about a rigged system — or allows his supporters to suggest that Clinton "stole" the primary — the more unpalatable he starts to look as a presidential nominee. On top of that, no one wants to take the nomination on just superdelegates, according to The New York Times. It's more satisfying if you also have the vote. Which she does.

Legions of Bernie supporters and factions like the Bernie Bros have already sworn off voting for Clinton in a general election. And it's really important, if Democrats want to beat Donald Trump, to ensure that voter turnout is strong in November. Bernie's stubbornness about dropping out right now could make that worse and that would be a bad thing. It's very unlikely that Trump will get the Bernie Bros, but if they stay home, that makes election night math a little trickier.

Even good old vice president Joe Biden thinks that it might be time for Sanders to stop talking about how superdelegates can change their minds. "It's clear we know who the nominee is going to be. [But] I think we should be a little graceful and give him the opportunity to decide on his own," he told CNN.

Sanders is right. The nominating process is totally messed up and makes no sense. But that's not why he's essentially lost and why Clinton felt comfortable enough making a pretty big "I'm the nominee" speech on Tuesday. He's lost the popular vote, too. Sure, Hillary Clinton's superdelegates can change their minds — but if Sanders is intent on dividing the party for the next month and half, why would they want to?

More Like This
Jessie James Decker's Husband Is Worried A Vasectomy Will Take Away His "Power"
Keke Palmer Casually Drops Her Baby's Sex On Jimmy Fallon
Freeze! The Single From The New 'Bluey' Album Just Dropped
Josh Duhamel Is Glad He Took Fergie's Advice About Dating After Divorce
What Parents Are Talking About — Delivered Straight To Your Inbox