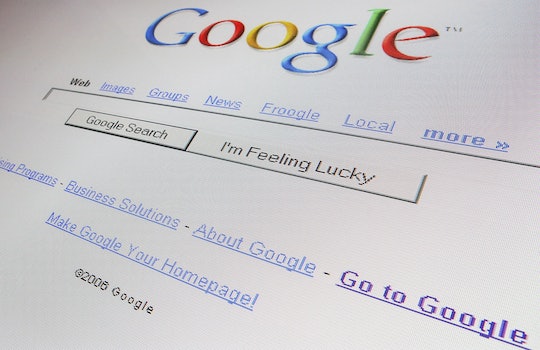 Why "Will I Regret Not Having Kids" Is A Common Search

Everyone knows that Google remembers what you search. It's why when you type in a question, it will often autofill, based on other people's popular searches. But it turns out people are turning to the search engine for some serious stuff, like asking Google if they will regret having kids or not. Think about it — in the sometimes anxious, scary parts of pregnancy, what did your searches look like? Pospartum, they're likely pretty revealing.

According to a new book called Everybody Lies: Big Data, New Data, and What the Internet Can Tell Us About Who We Really Are by Seth Stephens-Davidowitz, digs into this phenomenon of people turning to Google about the kinds of things they're not sure they could talk about in public.

It turns out, a lot of people ask the search engine if they're making the right choice when it comes to children, even though something like "regret" isn't really something an algorithm can calculate. According to Stephens-Davidowitz, people are seven times more likely to ask the search engine if they will regret not having kids than they are to ask it is they will regret having them.

Once they decide, Google's numbers are flipped. So adults with three kids are more likely to confess through a Google search that they regret having children than adults are who decided not to have kids.

More telling than the search question is how the Google search bar is a sort of safe space. People are much more likely to ask Google something that they feel they can't speak about over a brunch table — like regretting having their children — than things that are less taboo dish about. Stephens-Davidowitz writes in his book:

Let’s pause for a moment to consider what it even means to make a search such as “I regret having children.” Google presents itself as a source from which we can seek information directly, on topics like the weather, who won last night’s game, or when the Statue of Liberty was erected. But sometimes we type our uncensored thoughts into Google, without much hope that it will be able to help us. In this case, the search window serves as a kind of confessional.

In this way, technology can be really useful. Sure, typing "I regret having kids" isn't going to provide one with any wisdom or solution. But it's a simple way to express a thought that our culture doesn't really accept. If you told your friends, your mom, or even your therapist, they might look at you weird (at least, that's the fear). The same goes for lots of things that are nowhere near as deep as regretting or not regretting kids. Like if it's normal to have hair in certain places or certain digestive issues. Those things, too, probably won't make you many friends at the company barbecue.

But Google will never judge you.