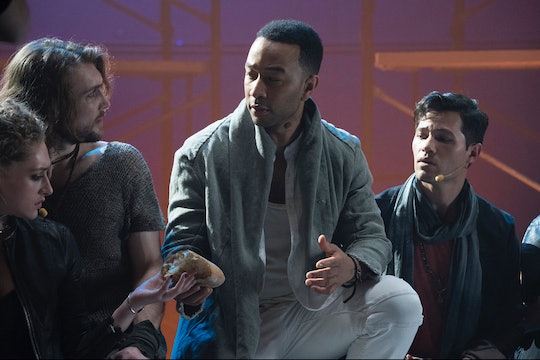 Still Need To See 'Jesus Christ Superstar Live!'? Hulu Has Your Back

Once you're done with any plans you may have on Easter Sunday, you can settle in on your couch and watch Jesus Christ Superstar Live! The latest NBC live musical takes Andrew Lloyd Webber and Tim Rice's iconic rock opera and brings it to the small screen with an all-star cast. Although the show is meant to be watched live, you might not be able to tune in for the show, which may be wondering: will Jesus Christ Superstar Live! be on Hulu?

Thankfully, like all the NBC musicals that have come before it, Jesus Christ Superstar Live! will make it's way to Hulu the day after it airs. However, it won't stay on there forever. It's hard to say how long the shelf life for the production will be, but previous NBC musicals like The Wiz Live! and Hairspray Live! are now listed as unavailable on the streaming platform. So if you want to watch Jesus Christ Superstar Live! you should definitely watch it sooner rather than later, otherwise you may just miss it and this is a show you'll definitely want to see.

Both composer Webber and writer Rice signed on as executive producers of the show, so you know the musical will stick pretty closely to the original script. As for the cast, playing Jesus himself is Grammy winner John Legend, and joining him on stage are Grammy nominee Sara Barielles as Mary Magdalene, Alice Cooper as King Herod, and Tony winner Brandon Victor Dixon as Judas. Also in the cast are Tony nominee Ben Daniels as Pontius Pilate, Tony nominee Norm Lewis as Caiaphas, Broadway veteran Jason Tam as Peter, M. Butterfly star Jin Has as Annas, and Swedish rock star Erik Gronwall as Simon.

If you've never seen the rock opera, it follows the last week of Jesus' life, pulling loosely from the Bible. Because the show is a rock opera there are no speaking parts, so if you're unfamiliar with the production and want to know more, you can listen to soundtracks from any number of the various productions of the show that have been done. That includes two films, the original iteration, and two Broadway revivals. You could also just watch one (or both) of the movies. However, I would recommend just watching Jesus Christ Superstar Live!; why spoil it for yourself, right?

And if you've already seen Jesus Christ Superstar, I would still recommend seeing this new ensemble regardless. While the storyline remains the same, the fact that it's being done by a different cast will make this a whole new experience. Plus, people will undoubtedly be discussing the show for days to come after it airs and don't you want to be a part of the conversation? Plus, you can compare Jesus Christ Superstar Live! to any and all the Jesus Christ Superstar productions you've seen previously.

Either way, everyone should tune in for the show. This may just be NBC's best live musical yet, and that's really saying something when they've done such great ones in the past. In this new era of live TV musicals it's hard to stand out, but NBC picked a good one and getting Webber and Rice to be a part of it was a nice touch as well. Throw in such an incredible cast and there's no doubt Jesus Christ Superstar Live! will be a massive hit. You can see the musical come to life on Sunday, April 1 at 8 p.m. EST on NBC. Don't miss it!