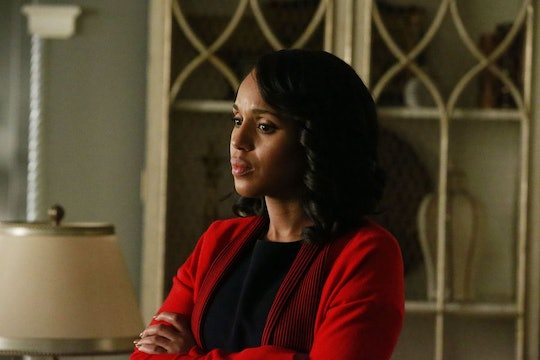 Olivia's Life Could Be In Danger On 'Scandal'

After the alternate reality episode of Scandal, some fans may have forgotten the dire situation Olivia has found herself in. This season started off with a bang when Frankie Vargas was killed after he was elected president. Fans now know it was Rowan who killed him, but he only did so because a mysterious group threatened to kill Olivia if he didn't. Now that Olivia knows the truth, she wants Cyrus to be freed from jail and become president, but doing so could have deadly consequences. So will Olivia die on Scandal? Probably not, but she may not make it out of this situation unscathed.

The preview for the next episode, titled "Trojan Horse," promises there will be blood, which honestly isn't that big of a surprise since these days there's almost always blood on Scandal. Still, the implication is clear. Even though Huck is now recovering in the hospital, that doesn't mean the mysterious group won't be looking for another victim, especially since Olivia wants to thwart their plans.

At this point, it's still unclear why they want Mellie to be president, but the fact of the matter is once Cyrus gets out of jail, which he will based on the preview, they're probably going to want to figure out another way to ensure Mellie ends up in the Oval, and they'll also want their revenge on Rowan.

The mysterious group promised Rowan that they could have Olivia killed at any moment if he disobeyed them and even though he technically did everything they asked of him, this group doesn't seem like the reasonable type. They'll want to punish Rowan if they don't get their way and the best way to do that is to kill Olivia. And with Huck out of commission, Olivia is even more unprotected at the moment.

But can you really have Scandal without Olivia Pope? Not really, which means death isn't an option for her. Even so, the group could still do something to her like kidnap her, except the show has already been down that road. Most likely, the group will do something totally unexpected, like turn the tables on Olivia and threaten Rowan's life.

It's a simple solution for them. Tell Olivia that if she's insistent on making Cyrus become president, they'll kill her father. Everyone knows Olivia controls Fitz and ultimately it'll be up to Fitz to decide who takes his seat in the oval office. Therefore, if they control Olivia, they have a direct line to Fitz and can get what they want.

Unless, Olivia makes the unexpected choice and actually let's her father die. Their relationship is messy at best and he did kill Fitz's son. Maybe it'll be Rowan's blood that ends up getting spilled by the end of the episode. Truthfully, with this show, you never really know what could happen.

Tune in to Scandal on Thursday, April 20 at 9 p.m. ET on ABC to see who becomes president and who gets hurt in the process.