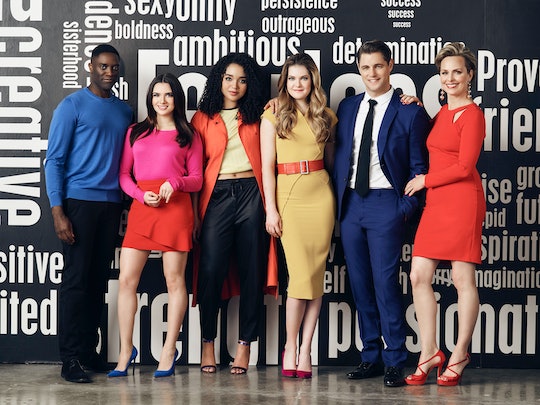 As the first season of The Bold Type comes to a close, its leading ladies are dealing with some serious upheaval in both their personal and professional lives. Jane might be exiting her dream job at Scarlet for an even dreamier one somewhere else. Immigration issues are keeping Kat separated from Adena for an indeterminate amount of time. Sutton, meanwhile, is still trying to get over her ex Richard while potentially starting something new with her friend Alex. There's so much more story to tell with these three girls, but the show's future seems uncertain. Will The Bold Type return for Season 2? The show's return has yet to be announced, but fans need not despair.

Freeform isn't a network that's quick on the trigger with cancellations; it generally gives its shows time to find an audience and settle into a groove. Other shows on the network, like Beyond and Famous in Love, were renewed for second seasons even though they weren't necessarily ratings juggernauts. With all the good press The Bold Type has been earning since its very first episode, it would be more surprising if Freeform did pass on renewing it. Nothing is certain yet, but there does seem to be a good chance that The Bold Type will be back for Season 2.

Numbers aren't everything, especially in a world where people catch up on their shows in a variety of ways, making viewership more difficult to measure. Praise for The Bold Type has to be taken into account too, and it has definitely garnered a lot of attention from the press. The show has been applauded for its feminist point of view and avoidance of stereotypes, making it feel fresh and fun (but not totally unrealistic, either).

But the critics aren't the only ones responding favorably to the show; fans have latched onto it as well, if social media is anything to go by. The Bold Type has everything its particular audience is looking for: social consciousness, girl power, killer clothes, and compelling relationships. The friendship between the three main girls takes center stage, but their work relationships and romantic endeavors don't get left on the back burner, either.

Viewers are invested in Kat, Jane, and Sutton and want to see where the next phase of their journey will take them. With love from fans and critics alike making the show a success, The Bold Type should definitely get a second season. But just to be safe, fans should keep their fingers crossed — or maybe uncross them just enough to send Freeform a tweet or two.