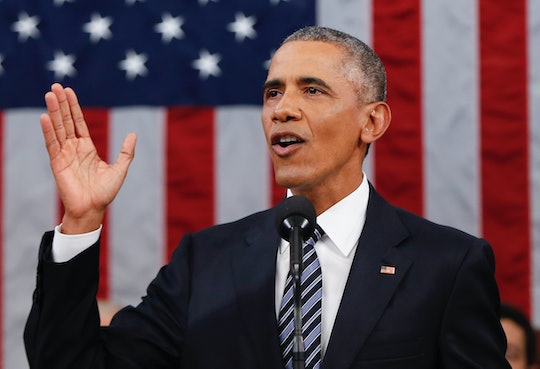 Will The Supreme Court Overturn Obama's Immigration Plan? The Court Is Split On Immigration

In what is destined to be a landmark case, the Supreme Court decided Tuesday that it would hear a challenge to President Barack Obama's immigration plan, which would allow certain undocumented immigrants to have protection against deportation, according to Vox. The Court said it would hear the United States v. Texas case and deliver a ruling by June, at the latest, according to the SCOTUS blog. So, will the Supreme Court overturn Obama's immigration plan? The questions of constitutionality are primarily based on Obama's use of executive action to create the program after years of inaction by Congress on the matter. But, although there's a good chance the immigration policy will live for now based on the justice's voting records, it's far from guaranteed.

Almost immediately after Obama announced his Deferred Action for Parents of Americans and Lawful Permanent Residents (DAPA) program in November 2014, it was met with opposition. Leading that movement was a coalition of 26 states, headed by Texas' Republican attorney general Ken Paxton, who has been successful in creating an injunction to keep DAPA on hold, partially on the grounds that the president did not abide by the "Take Care" clause in the Constitution. In February 2015, Federal Judge Andrew Hanen of Brownsville, Texas, determined there was standing to bring a lawsuit against DAPA because the program "not only ignores the dictates of Congress, but actively acts to thwart them," according to the New York Times.

The White House responded by saying it is confident Obama's actions on immigration are legal, according to a White House statement released last February:

Those policies are consistent with the laws passed by Congress and decisions of the Supreme Court, as well as five decades of precedent by presidents of both parties who have used their authority to set priorities in enforcing our immigration laws. The Department of Justice, legal scholars, immigration experts, and the district court in Washington, D.C. have determined that the President’s actions are well within his legal authority.

With support from 15 states serving as "friends of the court," the federal government quickly appealed Hanen's decision to the higher Fifth Circuit Court of Appeals, but Hanen's original decision was ultimately upheld with a 2-1 vote in November 2015. Judge Jerry Smith's decision used the controversial term "alien" in the explanation, according to The Atlantic:

At its core, this case is about the Secretary’s decision to change the immigration classification of millions of illegal aliens on a class-wide basis.

That's when the Department of Justice announced that it wanted the Supreme Court to consider the immigration case, according to the Huffington Post:

We're confident in the power of the legal arguments. And that's I think why you've seen the Department of Justice make such a quick decision to move this on up the line to the Supreme Court.

Still, the Court's agreement to take on the case isn't a clear victory for either side. When it was announced today, Texas Attorney Gen. Ken Paxton, the one leading the anti-DAPA campaign, said that SCOTUS hearing the case gives the states' arguments legitimacy, according to a release on Paxton's website:

In deciding to hear this case, the Supreme Court recognizes the importance of the separation of powers. As federal courts have already ruled three times, there are limits to the President’s authority, and those limits enacted by Congress were exceeded when the President unilaterally sought to grant ‘lawful presence’ to more than 4 million unauthorized aliens who are in this country unlawfully. The Court should affirm what President Obama said himself on more than 20 occasions: that he cannot unilaterally rewrite congressional laws and circumvent the people’s representatives.

Now that the matter is in the hands of the Court's nine justices, who will make a decision once and for all, the question is how can we expect the justices to vote? As it is, the Supreme Court is pretty evenly divided with four solidly progressive and four firmly conservative justices. That means rulings often hinge on "swing" voter Justice Anthony Kennedy.

In what could be a clue about where Kennedy will stand, he previously sided with the progressives and even wrote the majority opinion in the 2012 case of Arizona v. United States. In that opinion, he said: "The Federal Government’s broad, undoubted power over immigration and alien status rests, in part, on its constitutional power to 'establish an uniform Rule of Naturalization.'" Still, this case is a multifaceted one, involving not only the constitutionality of Obama's executive action, but also the question of whether the DAPA policy would harm the states. For that reason, the outcome is far from certain.

The Supreme Court is scheduled to hear United States v. Texas in April. Even if the justices vote in favor of Obama, that will only give him a short window of time to put DAPA into effect before the next president assumes office — and, if that person is a Republican, it's clear the benefits of DAPA will never be realized.