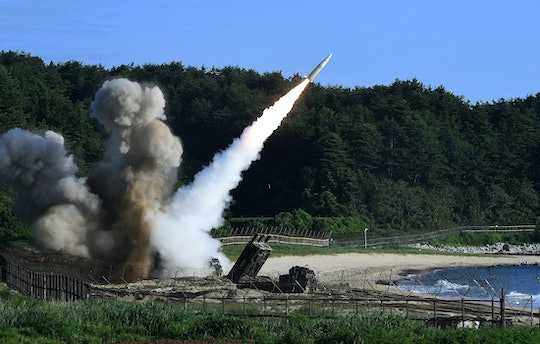 Will The US Be Hit By A Nuclear Bomb?

In a series of escalating threats about nuclear strikes between North Korea's leader Kim Jong Un and U.S. President Donald Trump, North Korean state media reported Tuesday that Pyongyang is prepared to strike Guam, a U.S. territory in the middle of the Pacific. All this talk of potential nuclear engagement has many Americans worried: Will the United States be hit by a nuclear bomb? It seems like such a simple question, but has a substantially complex answer deeply anchored in hostile geo-politics between the United States and North Korea.

Defense analysts report North Korea has produced a miniaturized nuclear warhead that could fit inside a missile, according to The Washington Post. So, it's no longer a question of whether or not North Korea can reach the United States, but it's definitely one of whether or not if it will be the first to strike. The world hasn't seen a country strike another country with a nuclear bomb since 72 years ago on Wednesday, when the U.S. military bombed Nagasaki, Japan, killing an estimated 40,000 people upon detonation, with twice that dying from the effects of the bomb in the following weeks and months.

The threats between Kim and Trump are intense for sure, but is this all just political saber rattling? Let's take a look at some of the most important facts we know so far.

On Tuesday, Trump warned North Korea to stop threatening the United States, telling reporters from his Bedminster, New Jersey golf club, "They [North Korea] will be met with fire and fury like the world has never seen," according to CNN. Hours later, Kim responded in kind, saying his military was prepared to strike Guam with "an enveloping fire," ABC News reported. While no one has dropped the geo-political "n word" — nuclear, just so we're clear — it's obvious that both Trump and Kim are chest beating their nations' own nuclear capabilities.

According to The National Interest, the United States operates several missile defense systems that could at best stop a nuclear warhead from reaching the country, to at worst minimizing casualties should a nuke already be in the air. But here's the reality of the situation. North Korea is a tiny isolated nation with few resources of its own. Kim, along with his late father and grandfather, have operated an oppressive authoritarian regime that starves its people and puts them in horrifying labor camps.

While developing nuclear warhead capabilities is a huge deal, most defense experts agree it would be a death sentence for just about the entire nation if North Korea led a nuclear first strike against the United States, be it Guam, Hawaii, or the U.S. mainland. Understandably, the president's borderline unhinged nuclear rhetoric is making people nervous, both at home and abroad. Even so, U.S. Secretary of State Rex Tillerson has said there is "no imminent threat" from North Korea — for now.