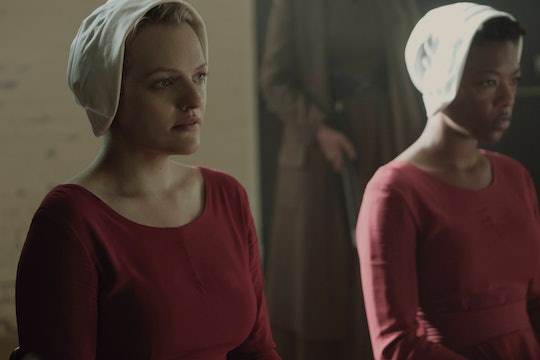 A Season 2 Of 'The Handmaid's Tale' Is Possible

Unfortunately, Margaret Atwood's classic novel, The Handmaid's Tale, feels more like a prophecy for a near future than just a dystopian novel to a lot of people these days. That's why the Hulu adaptation of the novel is coming at the perfect time. The first season of the TV series, which stars and was produced by Mad Men's Elisabeth Moss, begins on Wednesday, April 26, and fans are already wondering will there be a Season 2 of The Handmaid's Tale? For now, it's too early to call, though with the critical acclaim the show has already received, there's definitely a good chance.

At this point it's unclear if the 10-episode first season will cover the entirety of what occurs in the novel, if it goes past it, or if it ends before the book's conclusion. If it's the latter, it would seem fair to assume there will be another season, but that's something fans won't know until the first season concludes. Then again, the writers could decide to go beyond the book entirely to allow for more storylines to develop and occur that never had a chance to on the page.

Although the show will be airing on a streaming service, the whole first season won't be available all at once. Instead, the first three episodes will be available when the series premieres and then a new episode will be made available every Wednesday after that.

Until the entire first season airs, fans probably won't know if the show will come back for another season. Though if the show does as well as it appears it will, it'd be surprising if Hulu doesn't at least consider a second season. However, if Season 1 uses up all the source material, it would be interesting to see how the show could go forward. As I mentioned before, one solution would be just to make it up, but there's also a chance that there's more source material than many realize.

Recently, an Audible exclusive of The Handmaid's Tale was released, which included an extended ending to the novel. The new ending has led many fans to believe Atwood may even be working on a sequel to the original novel, according to Entertainment Weekly. Although a representative from Atwood's literacy agency played coy when asked about the possibility of a sequel, they didn't say it was off the table.

Even if Atwood doesn't actually publish a sequel, The Handmaid's Tale wouldn't be the first TV adaptation to go off book, so another season wouldn't be that surprising. If the show is as good as everyone says it is, fans would probably be open to seeing more, whether it was based on Atwood's own writing or not.