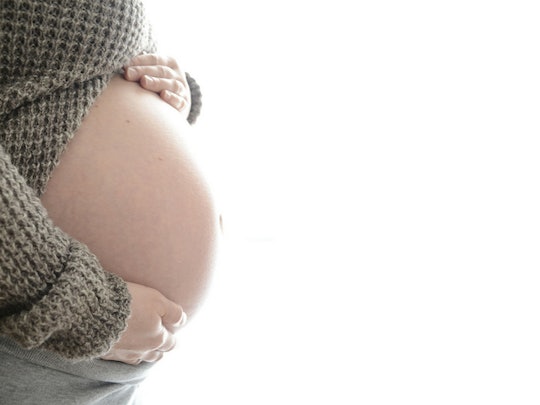 Reducing stress is a priority for most expectant parents, but there are some social stressors that can be hard to escape. For parents-to-be, one issue that permeates every aspect of raising a family — from birth plans to nursery furnishing — is money. While finances are a source of anxiety for many people, for parents-to-be, that stress could have a longterm impact on their kids. Worrying about money while you're pregnant can affect your baby's health, a new study found. But how can you not worry about money when having a baby can be so expensive?

Parents start spending money on their kids long before they're actually born, and not even just buying things like clothes, formula, and diapers (so many diapers). Prenatal care and the cost of actually giving birth in a hospital can vary wildly depending on where a person lives and what kind of health insurance they have (if any). That's assuming that the birth is considered medically normal; any complications can jack up the cost even more. Over the course of the last decade, labor and delivery costs have tripled — according to The New York Times, who asked Truven Health Analytics to analyze the data for a report it did back in 2013.

As it turns out, stressing over how to pay not just for labor and delivery, but prenatal visits, postnatal visits, and all the costs of child-rearing isn't just bad for parents: research from The Ohio State University found that women who worried about financial stress during pregnancy had lower weight babies than those who didn't. Previous research had linked low-income parents with a higher risk of low-birth weight babies, but researchers wanted to understand why. By identifying the most stress-driving factors, researchers hoped they could develop interventions to help parents cope.

The study asked 138 pregnant women to report things like their financial concerns, stress, depression and anxiety, and more general life stressors. The women were assessed throughout their pregnancies and again after their babies were born. Moms with the highest level of anxiety about money seemed to be the most at-risk for having babies with low birth weights.

Low-birth weight babies — less than 5 pounds and 8 ounces — are at risk for a number of health problems, many of which have to do with their not quite fully developed organ systems. These infants may have trouble breathing or nursing, and may require a stay in the NICU, according to the March of Dimes.

While the association was not altogether unexpected, what was most interesting to researchers was that the actual amount of money a family had wasn't what influenced their anxiety: it was the parents perceptions of their ability to meet expenses — regardless of their actual financial situation — that had the potential to negatively effect the pregnancy.

“There is no reason to worry about things that are out of your control," said the study's principal investigator, Lisa Christian, in the press release from Ohio State. "Instead, prepare for what you can change and create a financial plan. Reach out to friends and family for help, and find ways to reduce your anxiety like exercising or speaking with a psychiatrist. It is normal to feel financial strain during pregnancy, and there is a wealth of resources available to help.”