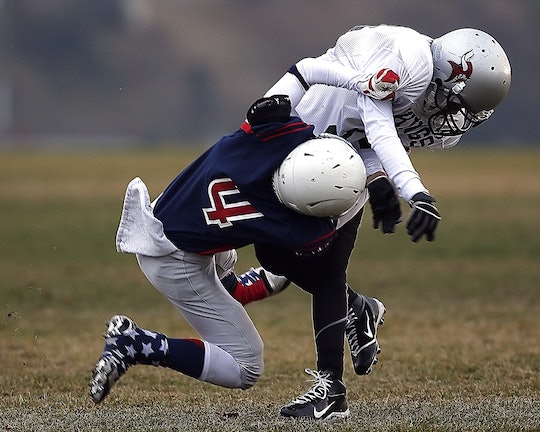 Youth Concussions Have Increased By 70 Percent, & Here’s What Parents Should Know

A new study analyzing insurance claims from Blue Cross and Blue Shield showed that reported youth concussions have increased by 71 percent in the last five years, according to Fox News. Researchers analyzed more than 900,000 claims to find that diagnoses for concussions increased 26 percent for patients between 26 and 64. But for many, it's the concussions among younger groups that are particularly concerning.

The study reported that for youth between 10 and 19, concussion diagnoses nearly doubled between 2010 and 2015. And states in the Northeast, like Connecticut, Pennsylvania, and Michigan, have the highest number of concussions in the country. Concussion diagnoses were found to be highest in the fall, likely when school sports, and particularly football, start back up. During this season, boys showed a much higher rate of concussions than girls — almost double.

But for the overall study period between 2010 and 2015, girls had a much larger increase than boys. This may be because of the increasing popularity of soccer for young girls. Another recent study showed that reported concussions obtained from soccer-related activities have increased dramatically, according to ABC News.

This study showed that more than 95 percent of these injuries were obtained at a sports recreation facility or at school, where kids participate in team sports. One 2013 ESPN estimate put the number of children in the country between the ages of 6 and 17 playing team sports at 21.5 million. That's a couple million more than the entire population of New York.

With more than 21 million kids participating in organized sports like soccer and football, and hardly any more safety regulations or gear being used now than in the past, it's no wonder that the incidence of concussions is increasing.

But it's not all bad news. The increase in diagnoses was found to be accompanied by a disproportionate increase in health insurance claims filed, which means that more people are reporting their concussions and seeking treatment than before.

Untreated concussions can be very dangerous. A mother writing for the New York Times said that her daughter did not receive proper treatment or care and therefore did not rest or minimize stress after an ice-skating accident. Lack of rest after a concussion or repeated concussions can result in "impulsive behavior, easy frustration, impaired social judgment and unpleasant personality changes" months later. It can even lead to dementia and depression. Symptoms of concussions can include fatigue, irritability, and difficulty focusing and remembering things.

It's clear that some parents are noticing these symptoms more and more, or that children are becoming more aware of the possible signs of a concussion. But, in order to grapple with the higher incidence of concussions, kids will have to take extra precautions while playing, and parents will have to vigilantly monitor their kid's health after a head injury.